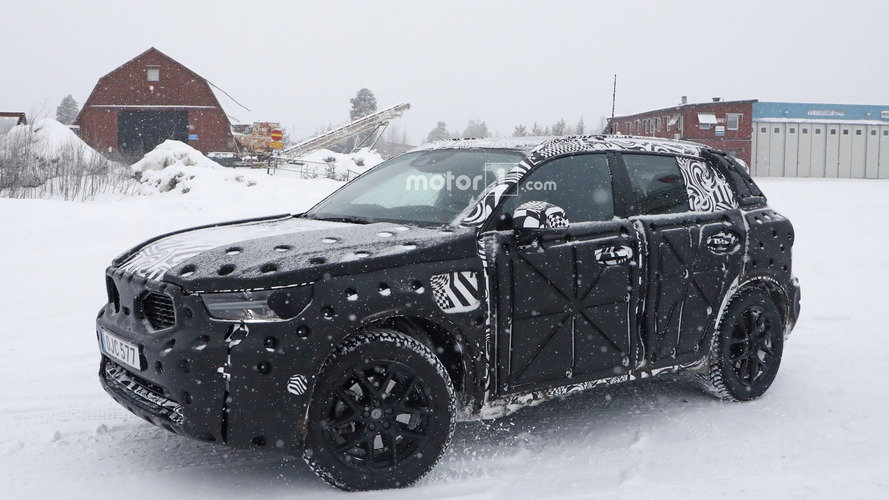 Will lose the Swiss cheese-like camouflage this autumn.

Volvo’s first-ever XC40 has been spotted on its home turf in Sweden during winter testing. Just like in our first batch of spy shots showing a production-bodied prototype, the test vehicle had not one, but two types of camouflage.

The first layer was the usual swirly disguise many automakers are using, on top of which Volvo slapped on some plastic bits with holes in them resembling Swiss cheese. As a side note, the same type of double camo was seen in June 2016 on a prototype of the next-gen XC60. Once the two layers of makeup will come off, the final design will be revealed to show what will likely be many similarities with the 40.1 concept (pictured below) and with a whiff of the much larger XC90.

Needless to say, the XC40 is a very important model for Volvo and its parent company Geely. Not just because it aims to tackle the premium compact crossover segment, but also considering it will be the first implementation of the brand’s newly developed Compact Modular Architecture (CMA). The same hardware will also serve as foundation for the usual S40 and V40 models due to arrive in the years to come. A reskinned version of the XC40 will be sold as the “01” model by Lynk & Co, a new subsidiary of Geely.

As for power, the 2018 Volvo XC40 will use an assortment of three- and four-cylinder engines, with the powertrain line-up set to be topped by a T5 Twin Engine setup. The latter is going to combine a three-cylinder 1.5-litre turbocharged gasoline engine with an electric motor to provide a combined output of approximately 180 horsepower. The onboard lithium-ion battery pack with a capacity of 9.7 kWh will provide the compact crossover with enough juice for an electric range of roughly 31 miles.

The XC40’s already-confirmed premiere this autumn doesn’t actually mean the posh crossover will debut at the Frankfurt Motor Show. Why? Because Volvo has made it clear it wants to cut back on auto shows and it will only be attending Geneva, the alternating Shanghai/Beijing, and NAIAS in Detroit. We’ll thus likely see it debut at Volvo’s own swanky event, as it was the case with the V90 Cross Country.