Techrules supercar teased ahead of Geneva 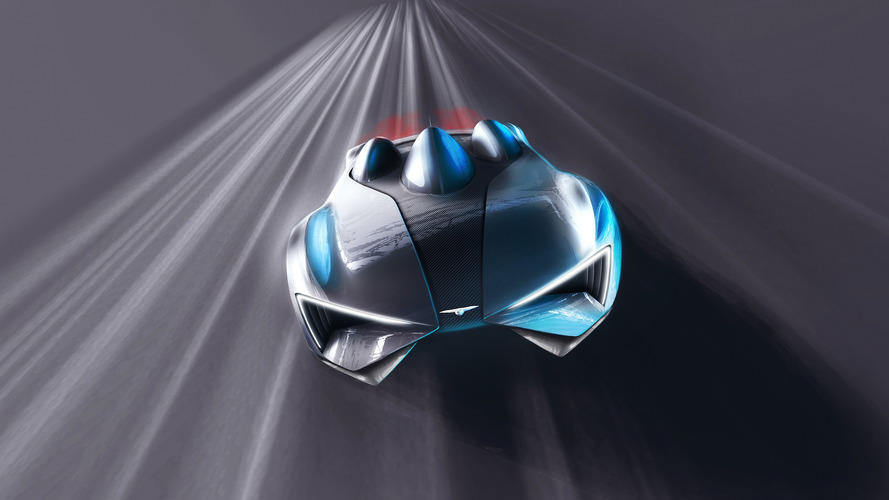 China’s Techrules supercar brand has one more teaser to show of its production-intent model before the car's confirmed debut at the Geneva Motor Show next month. The as-yet unnamed vehicle was previewed at last year’s event by a pair of AT96 and GT96 TREV concepts and now it seems the high-performance car is almost ready to reveal what the company describes as being a “dramatic design” in final specification.

“Form follows function” is the mantra trotted out by the Beijing-based marque, with the high-performance car set to feature a centrally positioned driver’s seat and a jet fighter-style canopy. The futuristic front end will employ a pair of laser headlights while at the back it will use “star-burst” LED taillights. Techrules will install cameras instead of conventional side mirrors, but as far as we know these are legal on a production car only in Japan.

Giorgetto Giugiaro and his son, Fabrizio Giugiaro, were in charge of designing the sharp body set to be attached onto a chassis engineered by Italy’s L.M. Gianetti. The latter will also be in charge of production scheduled to begin towards the end of 2017, with plans of up to 25 units annually. Initially, a track version of the car is going to be assembled followed by a fully homologated road-going version. Further down the line, Techrules wants to roll out more conventional models to tackle different segments of the market.

Meanwhile, the Geneva-bound supercar will make use of the company’s own Turbine-Recharging Electric Vehicle (TREV) powertrain. The aforementioned GT96 concept pictured above had a micro-turbine spinning at 96,000 rpm to produce 36 kilowatts, 30 kW of which was used to power the generator to feed the 20 kWh lithium-manganese-oxide battery while the remaining 6 kW for powering the auxiliary equipment. Two electric motors were mounted at the front and another other four at the back to grant the drivetrain with a massive output of 1,030 horsepower and a literally unbelievable 6,372 pound-feet of torque (that's not a typo).

The GT96 had a dry weight of only 1,380 kilograms, but Techrules is targeting a sub 1,000-kg weight for the road-going car. At least on paper, the concept was able to cover the 0-62 mph sprint in 2.5 seconds and max out at an electronically capped 217 mph. A theoretical maximum range of more than 1,242 miles was also mentioned.

Techrules will fully reveal the supercar on March 7th at the Geneva Motor Show.

Form follows function with modular design and technical elements that provide various configurations around the centrally-positioned driver. A theatrical arrival at any destination is assured, with occupant entry and exit enabled by the fighter jet-style canopy dramatically rising from the body. The aircraft-inspired cockpit is designed to provide occupants with exceptional visibility and are finished with premium quality materials.

From the futuristic front laser headlights and ‘star-burst’ reversing LEDs to the integrated rear-view cameras, the stunning design showcases distinctive Techrules styling characteristics and technology that will be seen across a family of models in the coming years.