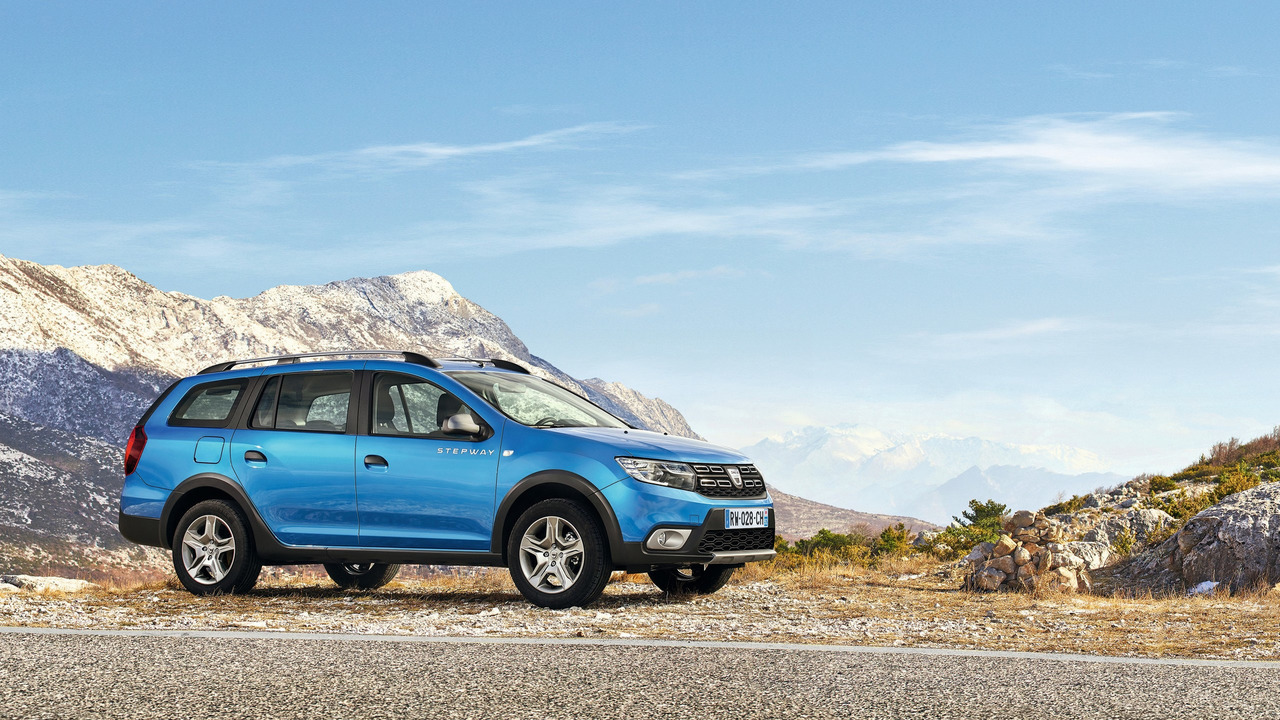 Renault’s self proclaimed value for money brand Dacia has announced a new addition to its Logan MCV family. The ‘Stepway’ branded variant follows in the footsteps of the car maker’s smaller Sandero, offering a rugged exterior look.

Revealed ahead of the forthcoming Geneva Motor Show in March, the new Logan MCV Stepway also boasts extra cabin storage, upgraded equipment and cosmetic design tweaks. Key to the Stepway sub-brand’s appeal is the added rugged ‘lifestyle’ angle which, in the case of the Logan, means an extra 50mm of ground clearance, a chrome skid plate and rugged-looking bumpers.

Power will come from a choice of two 90hp engines: one petrol and one diesel, both mated to a five-speed manual gearbox. CO2 emissions are rated at 115g/km and 100g/km respectively. At launch the car will also be offered in two colours, the brand’s iconic Azurite Blue and Mink, plus new 16-inch Stepway Dark Metal Flexwheel wheels.

Dacia hasn’t revealed exact pricing yet, but if the current gap between the regular Sandero and its Stepway sibling can be used as a guide then you can expect a premium of around £1,000 for the rugged Logan MCV Stepway over its less adventurous-looking stablemate.

The company’s new model offensive, which also includes a special edition Duster and Sandero Stepway is part of its continued global growth plan, which has seen the Renault brand increase market share in Europe and set new sales records.

addition of a fifth member to the Dacia range – the new Logan MCV Stepway – following the Sandero, Sandero Stepway, Duster and Logan MCV.

The new Logan MCV Stepway sports an undeniably muscular build, with an assertive personality that draws inspiration from the world of crossover styling, offering first class practicality and vast load space at an extremely competitive price.

The generously proportioned new Logan MCV Stepway carries over all the key qualities of the Logan MCV:

With its rugged good looks, eye-catching features and generous specification, the new Logan MCV Stepway is clearly a member of the Stepway family.

For easier ingress, its ground clearance has been increased to 174mm – 50mm more than that of the Logan MCV, while its high-up driving position ensures outstanding visibility.

At the front, the new Logan MCV Stepway sports a two-tone bumper as well as a satin-effect chrome skid plate, plus the fitment of fog lights. The model similarly incorporates Dacia’s new lighting signature unveiled at last year’s Paris Motor Show and which imbues it with a dynamic and thoroughly contemporary appearance, with headlights that now incorporate LED Daytime Running Lights (DRL) in the form of four stacked rectangles. This modern design results in a visibly wider look for the front end of the new Logan MCV Stepway.

The front bumper has been modified to exude an elegant yet athletic stance. Like the other models in the Stepway line-up, the new Logan MCV Stepway’s grille mirrors the black elements of the two-tone bumper, with the chrome rectangles rounding off its distinctive style in much the same manner as the Duster.

Meanwhile, seen from the side, the wheel arches and sills are accentuated by an exclusive trim that emphasises the model’s bold, powerful feel. The new Logan MCV Stepway also comes with Dark Metal door mirror housings and Stepway decals on the front doors, along with Dark Metal longitudinal roof bars which further emphasise the model’s estate car lines.

At the rear, the tail lights are picked out in black, while the new Logan MCV Stepway’s two-tone bumper and satin-effect chrome skid plate are characteristic cues of Dacia’s Stepway range.

A modern interior with more features than ever before

Inside the cabin, the new Logan MCV Stepway enjoys a new, more status-enhancing ambience first introduced several months ago in the new Sandero. This can be seen in the satin-effect chrome door releases, while the centre console fascia and air vents are trimmed by similarly-coloured surrounds.

The new Logan MCV Stepway comes with Dacia’s new four-spoke steering wheel – complete with horn push in the centre – in the brand’s Soft Feel finish, making it highly durable, easy on the eye and pleasant to the touch. The steering wheel mounted-controls are now better integrated, resulting in a more user-friendly and comfortable driving experience. In the middle of the wheel, beneath the Dacia logo, the word ‘Stepway’ is picked out in blue.

The upholstery fabric selected for the new Logan MCV Stepway first appeared inside the new Sandero Stepway. These seats feature a 3D weave for a greater sensation of depth, enhanced by top-stitching. The overall effect is an even more dynamic design.

The vehicle’s interior features have been conceived to take the strain out of everyday motoring. The door-mounted front and rear electric window switches fall more easily to hand than before. For enhanced comfort, drivers now benefit from a one-touch function and a retractable centre armrest incorporated into the seat. Last but not least, the model is fitted with one-touch direction indicators and a lit glove box.

In addition to the many stowage areas located conveniently throughout the cabin, rear passengers are pampered by a ceiling light and a 12V power supply to connect and charge portable devices.

The new Logan MCV Stepway will be available with a choice of engine and transmission options:

Dacia continues to break its own sales records

In 2016, in the 44 markets in which Dacia models are sold, the brand achieved sales of some 584,219 units, representing a year-on-year gain of six percent. This positive trend can be seen across all of the regions in which Dacia is active, with no fewer than 28 countries establishing either new market share or new sales records.

Over the last 12 years, Dacia has sold more than four million vehicles. Today, the brand stands out as a major player in the automotive market thanks to its clear policy of manufacturing attractive models that provide real value for money for the equipment they pack.

Dacia’s models are built at four different factories on two continents, with plants in Pitesti (Romania), Tangier and Casablanca (Morocco), and Oran (Algeria). The company’s policy is to produce as close as possible to its markets in order to adapt to the different needs of its customers as closely as possible.

In its attractive product range, Dacia is a popular thanks to its active community of followers, with some 3.5 million fans across its various social networks.