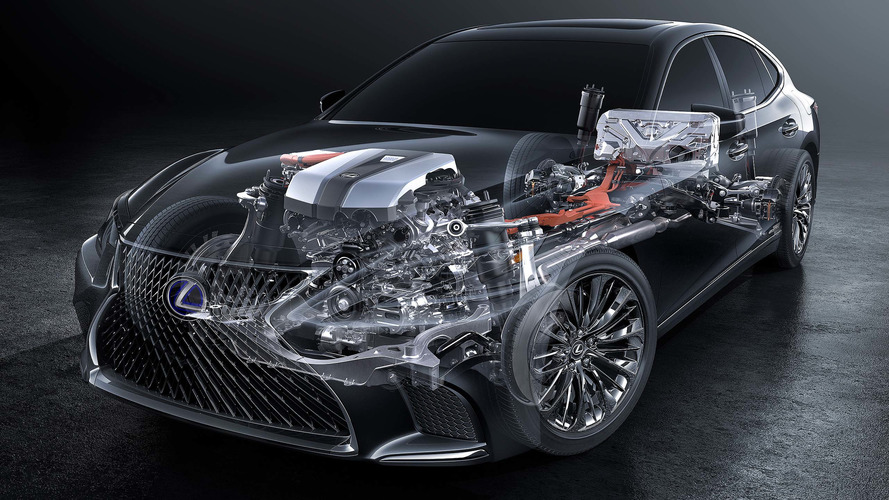 Allows full EV cruising at speeds of up to 87 mph

The new Lexus LS 500h, set to debut at the 2017 Geneva Motor Show, will feature the firm’s latest Multi Stage Hybrid system, promising more efficiency, better acceleration and a more driver-pleasing feel. It can also let the new LS cruise in full EV model with the engine off at speeds of up to 87 mph.

Lexus says throttle response has been improved, high-speed cruising revs are lower and responsiveness when pulling away from a standstill is much-improved. This is all facilitated by the new four-stage shift device that’s been added to the Lexus Hybrid Drive powertrain - consisting of two electric motors and a 3.5-litre V6 petrol engine.

This new four-stage shift system is so advanced, claims Lexus, it’s able to replicate the sensations of the 10-speed automatic transmission fitted to the non-hybrid, twin-turbo Lexus LS 500. Acceleration is linear, direct, and continuous.

It’s not the first application of this latest Multi Stage Hybrid System. It’s already fitted to the LC 500h, the coupe version of the new Lexus LS saloon. Motor1’s Sebastian Blanco called it enjoyable and “not too different from the way the standard LC 500 feels”. But he did note “you still have that indeterminate momentary pause between pounding down on the gas pedal and feeling the car react.

“As someone who’s completely fallen in love with the instant torque of all-electric powertrains, the LC 500h felt like a step backward.”

The Geneva show will be the world debut of the new LS 500h, scheduled for 12.45pm local time on 7 March in Hall 4. The reveal follows the full global debut of the 2018 Lexus LS model at the Detroit Auto Show back in January.