Charging curves and peak charge rates: Why it matters

The curve and peak both matter, so let's dive into the details.

Charging curve is a term you hear thrown about a lot, but it’s a bit tricky to get your head around. We’ve been so accustomed to pumping fuel into our cars for decades, and many people expect the process to be the same for EVs…but it’s not! Stick around as we take a look at Charging curves…what they are, what it means, and some of the best EVs out there!

What is a charging curve?

So in a nutshell, what is a Charging Curve? Essentially, it’s the change in speed that your car will charge at as it gets fuller and fuller. The rate that your EV charges depends on a number of factors, but the most important is what the state of charge is. In principle, when it’s nearly empty it charges quickly, and when it’s nearly full, it charges slowly.

Let’s use an analogy to explain it. We’ll take the hose pipe analogy first. You’ve got a bucket and a hose. You put the nozzle into the bucket and twist the tap or faucet. The water flies in at the start. But as you start to fill up you have to slow down the amount of water to make sure you don’t splash it all over yourself.

There’s also the cinema analogy. The first person walking in has a whole theatre to choose from…any seat you want. It’s easy to get people in at the start. But as it starts to fill up, seats are scarcer and it’s trickier to find a spot. Once you get up to 95% full it’s tough to find a spot and it can take quite a while to seat people.

When you see cars advertised as having a certain DC charging speed, say 120 kW, you might think that you can plug in and get that speed for however long you’re connected. That’s not the case though. Firstly, you have to be connected to a unit that can put out that kind of power. A lot of the older stock are 50 kW units.

But if you do plug into a 150 kW unit on 5%, the car will quickly ramp up to its maximum, or ‘peak’ rate. But you won’t stay at 120 kW all the way to 100%. The car will peak at 120 kW but then slow down as the battery fills up. It’s this ramping up and tapering down that we call the charging curve.

Why does it matter?

So why do charging curves matter? Well, they do and they don’t we suppose. For many people, they’ll almost never use a public DC charger. They’ll just top up at home on AC at 7 kW overnight. Maybe a handful of times they’ll use a fast charger on a long trip, but they’ll stop for lunch and they don’t care if it takes 25 minutes or 30 minutes to top up.

But for some people who drive for work or take regular long trips to visit family, it’s more important. They want to know how long it’s going to take them to get from 10% to 50%, or 20% to 80% so that they can get back on the road as quickly as possible. Although the car might peak at 100 kW, it’s not good if it does that to only 20% then drops down to 20 kW by the time it’s at 70%.

But what probably affects us all, and may well be the most important is that EV owners understand this curve and how it affects charging when the battery is nearly full. It can be really frustrating to see an EV owner hogging a fast charger as they go from 95% to 100%. We’re going to be nice and say that it’s just because that person hasn’t yet understood the charging curve.

Now, the speed you get will be determined by a lot of factors, so it’s not possible to say definitively what the curve is. But we can get some data from the likes of charging network Fastned that publish some charts.

Let’s look at some examples quickly to get a feel for what we mean. And where better to kick things off than with the beautiful Audi e-tron GT?! This car peaks at just over 260 kW on DC…that is if you can find a DC unit capable of putting out that kind of power! But like we said already, it won’t hold that speed all the way to 100%.

Let’s say you plug in at 5%, the car will quickly hit about 260 kW. It will hold that speed until the battery gets to something like 50%. But then it drops down in stages, and by the time the battery gets to about 75% it’ll be pulling about 100 kW. And what’s really impressive is that the GT can hold on to 50 kW up to about 95%!

At the other end of the spectrum, let’s look at the Mazda MX-30. We’ve reviewed the Mazda on this channel before, and it’s really nice inside, feels great…but oh man is the battery and charging…emmm….underwhelming let’s say. The Mazda will peak at a miserable 37 kW! Even an original LEAF from a decade ago beats that! But another big problem with the Mazda is its charging curve. Once the car gets to about 50% or 55% it starts to ramp down.  By the time the battery gets to 80%, you’ll be lucky to be getting 20 kW. Ok…let’s move on from that now!

Last, but certainly not least, let’s have a quick look at the Volkswagen iD.4…one of the most popular EVs on the road now. The iD.4 has a peak charge rate of about 135 kW on DC, which is nice. It’s not market-leading but still quite decent. But what’s the curve like? The battery pack is 82 kWh, of which 77 are usable. The iD.4 will quickly ramp up to its peak of 135 kW. But we start to see it slowing down at around 30%.  It’ll still be holding onto 100 kW at about 50%. The good news is that it will plateau a little and hold a good rate of about 80 kW through to about 80%.

That’s our quick video on Charging Curves. Of course, it’s far from an exact science and the scene is changing constantly! Even over-the-air updates can make the car you have now different from the one you bought a few months ago!

So let us know what you think in the video comments!

Is your EV’s charging curve something you’ve ever thought about, or maybe it makes next to no difference to you! 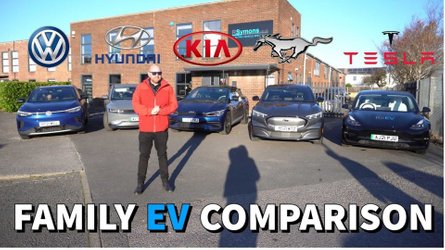 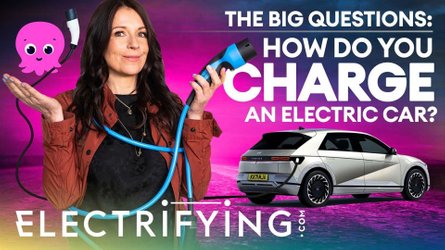 UK: Is it really that difficult to charge an electric car?
By: InsideEVs Editorial Team
Published by: Brian Potter
++
++