The ID.4 GTX is basically an ID.4 infused with VW's GTI chassis know-how, but is it that different from America's ID.4 AWD?

That said, many reviewers, owners and potential customers who have had a go in the ID.4 have been left wanting for more excitement, particularly in the areas of driver involvement and performance.

Sure, this is a family crossover, but so is the Tesla Model Y and its performance clearly outshines the ID.4. Enter the VW ID.4 GTX, the first of several electric vehicles from Wolfsburg to wear the performance-conscious badge.

Seen as the GTI’s equivalent in VW’s electric car lineup, the GTX brings a series of aesthetic and performance tweaks over regular ID.4 models. Unfortunately, the United States will not get this GTX-badged model, so are they missing out on anything?

Well, this UK review from Electrifying provides some answers. As Tom Ford puts it, the ID.4 GTX is an ID.4 stuffed with VW’s GTI know-how, and the chassis tweaks are obviously the headline act. In the ID.4 GTX’s case, they include stuff like the standard sports suspension and the Vehicle Dynamics Manager, which works closely with the ESC and AWD control systems to keep the body level in corners and make the most of the available grip.

Also connected to the VDM are the XDS+ electronic axle differential lock, which redirects torque from a wheel that starts to spin to the one that has grip, and the optional DCC adaptive chassis (not available in the US). These systems work together to make the ID.4 GTX sporty to drive in corners, with Tom Ford calling it the most fun to drive ID.4 he’s driven to date.

Now, the ID.4 GTX does have some shortcomings according to this reviewer, including the variable rake steering that lacks feedback and the brakes that don’t react as quickly as one would want on a 295-bhp sporty crossover during spirited driving.

Speaking of spirited driving, the dual-motor ID.4 GTX is certainly Golf GTI fast, with a 0-62 mph time of 6.2 seconds. The 180 km/h (112 mph) top speed is not that GTI-like, though, but who is going to take their GTX to the track? 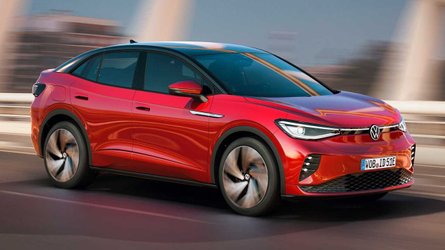