There are other livery colours besides orange and blue.

Race car liveries appearing on road-going cars isn’t new. It’s a way for automakers to link a new model with the company’s past heritage, while the aftermarket serves those wanting something a bit more unique. The orange-and-blue Gulf Oil livery is one of the most iconic in motorsport, endlessly recreated.

But racing is filled with gorgeous other liveries that don’t get the recognition they deserve. That’s why the five renderings from LeaseFetcher.co.uk caught our attention, applying five past livery to a modern-day counterpart.

The oldest livery of the bunch is the one from Nikki Lauda’s 1975 312T, though it’s been recreated on a thoroughly modern supercar – the Ferrari SF90 Stradale. The red body, paired with the white greenhouse, looks excellent on the sleek supercar.

Another stunning livery rendering is Michael Schumacher’s blue-green Benetton B194 lone. It’s pleasant, though an uncommon combination of colours that the Ford GT, with its flying buttresses, makes look good. The dark blue adds contrast against the lighter shade and green.

Ayrton Senna’s first F1 world championship came in 1988 while he was behind the wheel of McLaren Honda’s MP4/4. It wore a red-and-silver Marlboro and Shell livery, which translates well to the Honda NSX and its reserved supercar styling.

Mika Häkkinen’s McLaren Mercedes MP4/14 livery on the Mercedes-AMG GT is reminiscent of a spacecraft reentering orbit as the front begins to glow white-hot from fiction. It looks like the paint at the front of the Mercedes is burning away.

The odd one of the bunch is the Renault Mégane RS Trophy-R, which can handsomely wears Fernando Alonso’s Renault R25 Livery from 2005. The two-tone blue with the slash of gold along the side accentuates the hatch’s aggressive stance and sporty squat. 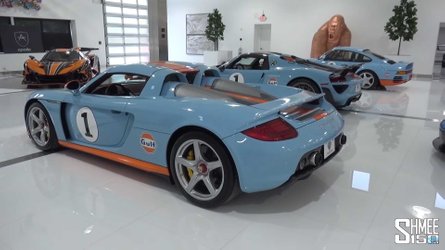 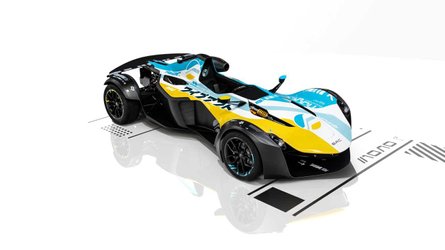