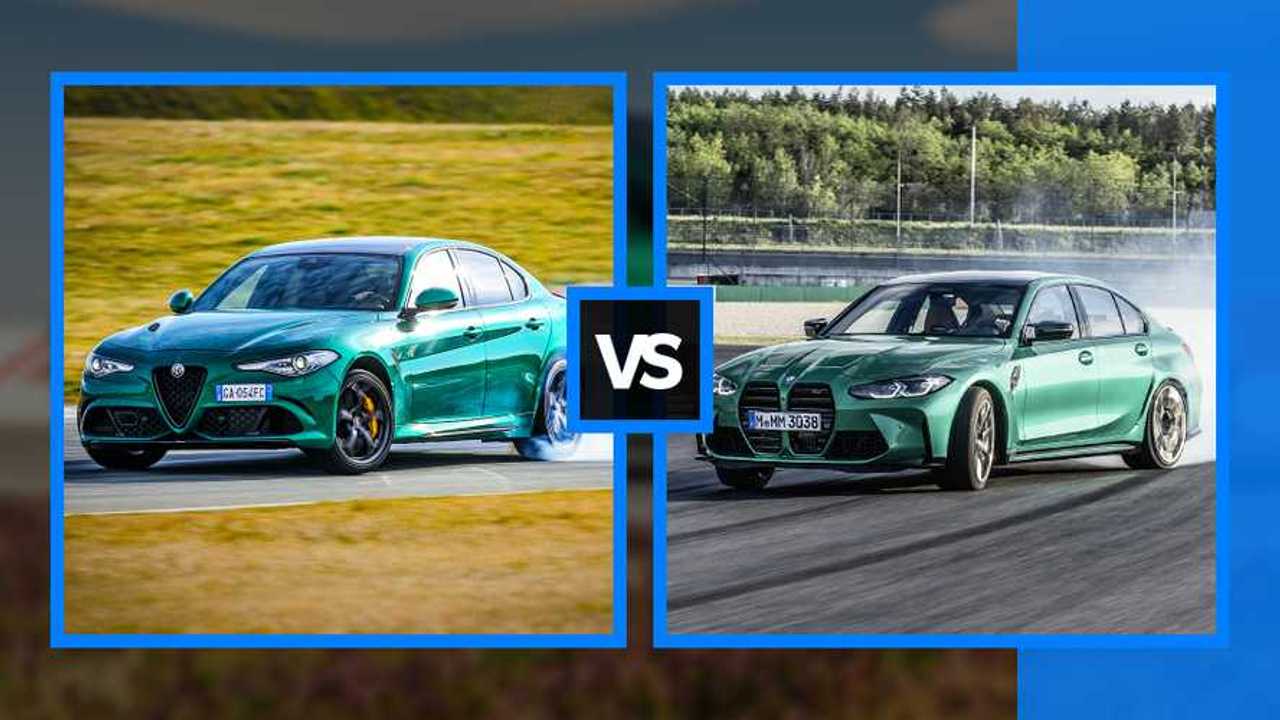 Whenever BMW releases a new version of the M3, it’s always best to compare it to the competition. Often, it’s compared against the Mercedes-AMG C63. However, the new M3 Competition sits squarely against the Alfa Romeo Giulia Quadrifoglio. Both the BMW and Alfa produce 510 bhp (380 kilowatts)

This isn’t a hardcore, data-driven comparison. The M3 Competition doesn’t go on sale until next summer, but we can compare the two on paper. The BMW has incredible performance, but the aging Alfa still brings plenty to the table while packing a sizeable punch.

The Competition Aims At The Biscione

It’s no coincidence that the new BMW M3 produces 510 bhp in its top Competition form. That’s the same output as the Alfa Romeo Giulia Quadrifoglio. Another similarity between the two is their green paint. The M3 features a metallic Isle of Man Green that looks nearly identical to the Montreal Green Alfa offers on the Quadrifoglio.

Where those two differ is in their style. Both are extreme four-door saloons that offer a high level of performance. The BMW pushes the car’s design with the large kidney grille and aggressive, angular styling. The Alfa sports its iconic triangular grille and badge..

The German saloon is the larger offering of the two. It measures 16 centimetres (6.3 inches) longer and 3 cm (1.18 in) wider. However, even though both are slightly different sizes, the trunks both swallow 480 litres (16.9 cubic feet) of cargo.

Given the incredible performance achieved by Alfa Romeo Giulia Quadrifoglio and the promise of the new BMW M3, it is necessary to take a closer look at the technique and mechanics of these top sports sedans.

What they have in common is a six-cylinder, twin-turbo engine – in-line on the German and V on the Italian. Both have a displacement close to 3.0 litres and identical power – 510 bhp. In terms of maximum torque, the BMW prevails slightly, but the Alfa Romeo develops it at a slightly lower speed. Both are equipped with an eight-speed automatic transmission.

A fundamental difference between the two challengers is traction. The M3 Competition powers all four wheels even though the BMW allows you to choose rear-wheel bias through the M xDrive system. The Alfa is only available with rear-wheel drive.

The non-Competition BMW M3, which will not be sold in the UK, is available with rear-wheel drive, but power is down to 480 bhp (357 kW) with a manual gearbox, which is not comparable to the Quadrifoglio.

Today’s sports sedans offer incredible performance, and that’s no difference between the Alfa and the BMW. Both claim a 3.9-second time to run from zero to 100 kilometre per hour (62 miles per hour). However, compare their top speeds, and the Giulia wins at 307 kph (190 mph). The M3 Comp requires the optional M Driver’s package to unlock the model’s top speed, and even then, it only reaches 290 kph (180 mph).

Fuel consumption may not matter to these cars’ owners, but the Giulia again comes out on top, according to WLTP homologation data.