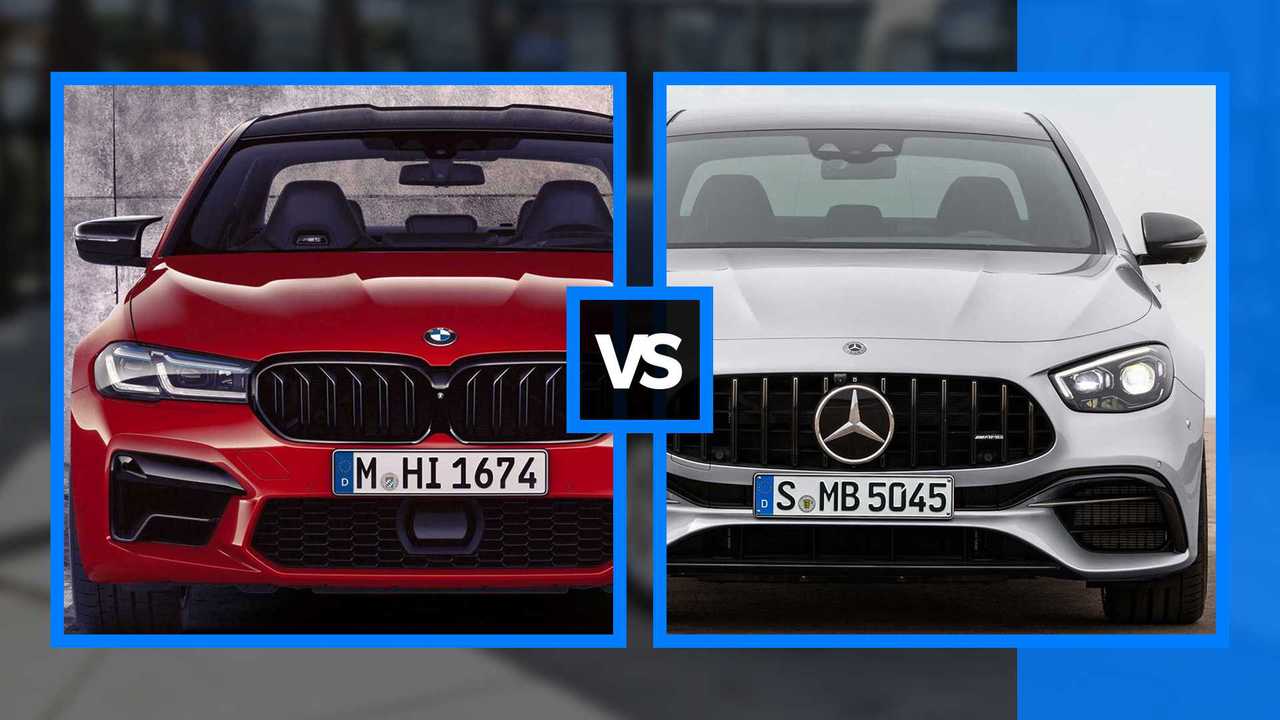 BMW and Mercedes are two formidable German institutions that have no qualms going toe-to-toe – or wheel-to-wheel – which they have for years. This month, that fearlessness was on full display when both revealed new super saloons – the BMW M5 and the Mercedes E63 AMG. Both receive new styling and other updates, but the engines underneath have been left untouched. However, until they arrive, we can only compare the two on paper.

The BMW M5’s restyling remains faithful to the classic double kidney mask the Bavarian automaker is famous for, and they’re slightly larger than the ones on the normal 5 Series. However, they don’t grow as large as those on the 4 Series, which should please some. The Mercedes continues to use its Panamericana grille with vertical slats. The grilles for both exude sportiness while also helping improve airflow to the engines.

At the rear, the two resort to similar solutions for design and functionality. The M5 has a slightly larger extractor paired with circular tailpipes, while the AMG features trapezoidal ones. However, both feature a small spoiler, a thin and unpainted piece of carbon fibre, perched on the boot lid.

Between Technology and Sportiness

Inside, the M5 and E63 benefit from the technology installed in the lesser counterparts from which they’re derived. The Bavarian saloon features a 12.3-inch central monitor flanked by a 100-percent digital instrument cluster. The E63 packs the latest MBUX infotainment system with the dual tablet-style display.

Both have plenty of sportiness with wraparound seats, aluminium and carbon fibre inserts, supple leather, and plenty of Alcantara.

Learn more about the super saloons:

There Is Only The V8

Here’s the heart of the challenge: what lies under the bonnet. Both have V8 engines – 4.4 litres for the M5 and 4.0 litres for the E63 – without a hint of electrification in sight. Each feature two turbos, two power offerings, and automatic gearboxes. The M5 has eight gears in its gearbox while the E63 has nine.

Both saloons come with all-wheel drive, but both can turn into tail-happy tyre shredders with the touch of a few buttons. The BMW sends power to the rear with the touch of a button, though the Mercedes system only works if the driver also switches off ESP.

Of course, there are specific differences between the two, each offering unique driving modes, features, and appearance packages. One significant difference between the two is the body style – both come in the form of a saloon, but Mercedes offers the E63 as an estate.