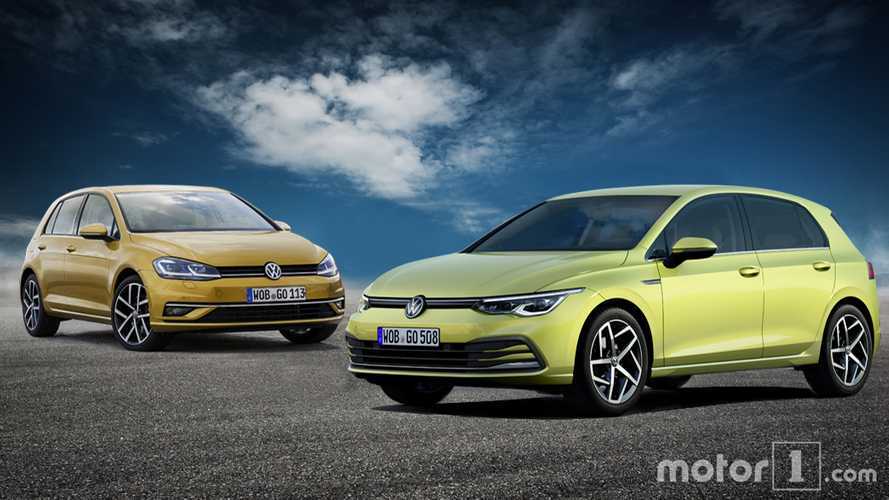 The interior gets a complete overhaul.

The 2020 Volkswagen Golf debuts to introduce a new generation to the hatchback's family for the first time since 2012. VW overhauls the five-door hatchback without abandoning the hallmarks that contribute to the Golf's decades of success.

Check out Motor1.com's slider tool below to see how the models compare. The seventh-gen model is on the left, and the new one is on the right.

All about the Golf 8:

The front end of the eighth-gen Golf shows a significant evolution over the previous model. The nose has a more prominent downward arch, and the headlights now appear to sit lower at the front. The upper edge of the lamps create a line that runs across the vehicle's entire width, and this element gives the car a sleek, modern appearance. All Golf trims now come standard with LED headlights.

The front fascia has three strakes that also span the model's width. In combination with the line from the headlights below the bonnet, this makes the new Golf appear broader than the old one. In reality, the 8th-gen model is a bit skinnier at 1,789 mm versus 1,799 mm for the previous generation.

The design tweaks to the Golf's rear aren't quite as significant as the alterations at the front, but there are still noticeable changes. The taillights now have a sharper appearance. The Golf badge is larger and sits directly below the emblem in the centre of the hatchback. The trapezoidal exhaust pipes have a similar shape and still incorporate into the bumper.

The image above shows that the rear window appears smaller on the new Golf. The difference seems to come from the way the rear spoiler attaches to the roof and cover more of the glass below it.

The exterior design changes are minor in comparison to what Volkswagen does on the inside of the new Golf. The model comes standard a 10.25-inch digital instrument panel and an 8.25-inch infotainment screen, which now sits at the top of the centre stack. A 10-inch infotainment display is an available option. The centre console also has a styling overhaul, particularly for vehicles with an automatic transmission because there's now a shift-by-wire gear lever.