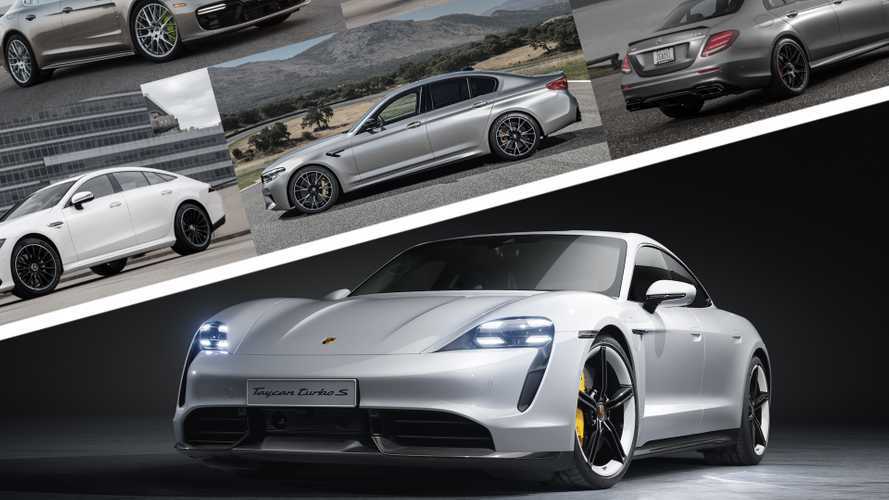 How does Porsche’s EV stack up against its Panamera kin, as well as the best from BMW and Mercedes?

Purists will argue the Porsche Taycan’s competitors are other battery-electric sedans, such as the Tesla Model S. But not all consumers play by those rules. In fact, many shoppers simply want the best performing vehicle their money can buy.

Taycan to the limit:

Predictably, the near-immediacy of the Taycan Turbo S’s 751-bhp and 774 pound-feet of torque helps the electric Porsche off the line with launch control engaged (the motors top out at 616 ponies without launch control). Sixty miles per hour arrives in a hair-raising 2.6 seconds, or 0.5 second ahead of the next quickest options, the 617-bhp BMW M5 Competition and the 630-bhp Mercedes-AMG GT63 S 4-Door Coupe.

With only two gear ratios for its rear motor (the front motor runs a single ratio), the all-wheel-drive Taycan Turbo S’s top speed of 162 miles per hour is more than 20 mph slower than that of its petrol-sipping competitors, which offer seven-, eight-, and nine-speed gearboxes. That said, it’s unlikely typical buyers will ever reach any of these super saloons’ top speeds, and the Taycan Turbo S’s superior straight-line acceleration is sure to make more of an impact on shoppers’ day-to-day driving experience.