A world-leading car museum is being planned for the Cotswolds 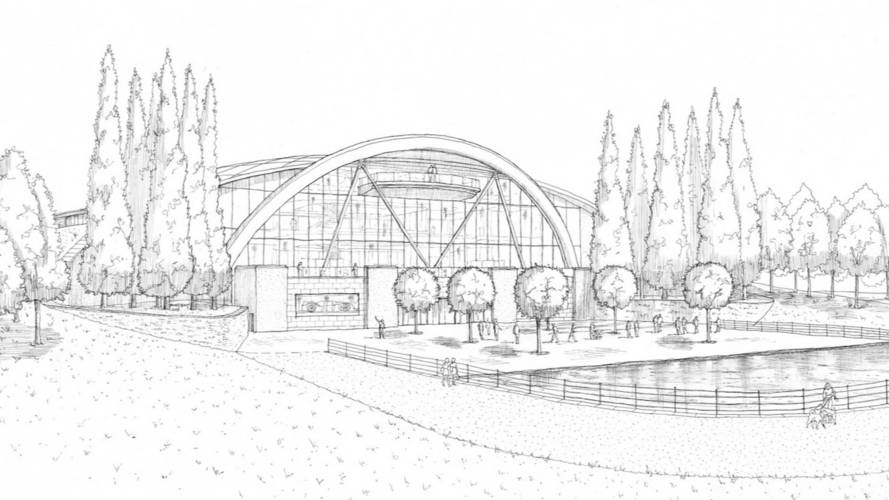 This could become one of the top five automobile museums in the world. Don’t believe it? Wait until you read the plans, and who is behind them...

Imagine a stylish new car museum, combining displays of some of the most priceless, all-time greats of the automotive world with state-of-the-art interactive displays and future technology. Imagine that this new museum sits in 160 acres of landscaped grounds which include a workshop, special display areas and, best of all, a demonstration road on which museum cars will be exercised several times a day.

Sounds good? It could feasibly become one of the world’s top five car museums, up there with such gems as Mercedes-Benz World, the Porsche museum and the Petersen – especially when you consider that £150 million would be invested in the project.

But where would it be? The USA? Germany, perhaps? Or how about the Cotswolds, smack in the middle of an amazing tranche of automotive and motorsport businesses, and close to some of the UK’s best-served public transport links. But surely there’s a problem – where in the Cotswolds could a museum and surrounding 160-acre plot possibly sit without causing a Middle England meltdown?

The location is Enstone Airfield on the Great Tew Estate, six miles from Chipping Norton and close to the new home of David and Victoria Beckham, as well as the chic new Soho Farmhouse development. Interestingly, it’s also just three miles from the Renault F1 team HQ, which employs 600 people.

The team behind the museum proposal is expecting a maximum of 200,000 visitors a year, including children, so the proposal – named The Mullin at Great Tew – addresses this by keeping hours to 9.30am opening and 4.30pm closing times, and running the ticketing in pre-booked time slots to prevent museum traffic from coinciding with the morning and evening rush hours. Additionally, visitors will be encouraged to arrive by train, with shuttle buses laid on by the museum between stations and the venue, as well as discounted entry for those arriving by public transport.

Peter Mullin, the man behind the new initiative, is also chairman of the Petersen Automotive Museum, president of the American Bugatti Club, serves on the advisory board of the Guggenheim Foundation and is one of the most popular personalities in the top-end collector car world. So why a museum in the Cotswolds, of all place? ‘I’ve had a home in the UK, in Scotland, for about 35 years, and I love that part of the world. And the Cotswolds is somewhere I’ve had the chance to spend a significant amount of time over the past few years, and I think it is just spectacular.

‘You combine the location with the fact that this is the motorsport centre of the UK: with the exception of Ferrari and a couple of others, every Formula 1 team is within 30 miles of this site. Then when I think about how close it is to London, available by car in 90 minutes or via three mainline railway stations and shuttle buses – if I was going to create a museum to share our passion with Europe and Great Britain, then this seemed like a natural spot.

‘There’s enough room here to actually demonstrate cars – collectible, vintage, special, world-class cars – on an exercise track as opposed to sitting stationary in a museum, which adds another dimension to the visitor experience.’

The most vocal objection so far, from local landowners and fronted by Star Trek actor Sir Patrick Stewart, is that the plan is ‘elitist’, perhaps misunderstanding that the museum will be open to all, and will include educational opportunities for school children and college students. ‘A key objective of the project is that it will serve visitors of all ages, rich and poor, young and old,’ asserts project director Kieran Hedigan. ‘This is a destination that will inspire the grandparents and the grandchildren and everyone in between.

‘Is it elitist to be open 300 days a year?’ Kieran continues. ‘To offer discounted annual membership to local residents? To welcome school trips free of charge? To employ apprentices and set up scholarships with engineering and design universities? To seek out and train retired local car enthusiasts to be museum guides?’

The Mullin at Great Tew plans are still in outline phase only, awaiting the verdict of the planning-permission application, but it’s still an impressive proposal even at this stage. From the outside the 60,000sq ft museum appears to grow out of the landscape, with significant proportions of the building effectively underground, except at the cutaway front aspect. The current proposal is for the roof to be steel, in Goosewing Grey to blend in with the sky, and with a large overhang to shelter the balconies below.

The museum would be built around a central atrium, from ground floor to roof, with three floors of galleries arranged around that atrium. Visitors would start from the top floor and work down through the various displays. Beneath the museum would be a basement storage vault, allowing room for 200 cars in all. Around 70 of these would be displayed in the museum, on a regular rotation. Peter has committed a minimum of 25 of his own automobiles, again on rotation, to the displays. All the serviceable museum cars would be exercised regularly on the demonstration roads outside the museum, allowing every visitor to see vehicles in action during their visit.

A workshop, planned to sit just inside the main gates, would be used to service and maintain the cars, with more involved jobs farmed out to the many local specialists – Bicester Heritage is just 15 miles away, for example. Visitors will be able to view work in progress in the workshop.

Alongside the demonstration road will be the Showlane, a 100m-long building, complete with mezzanine level and balcony overlooking the demonstration road. It will be divided into six separate units, suitable for car manufacturer customer centres, corporate events or exclusive retail units.

The outline planning application is with West Oxfordshire District Council. Clearly a project of this scale needs full and proper consideration, but a decision is expected as soon as April or May 2018. If planning is agreed, then the build of the museum will take a further 18 months at least, taking it into 2020. The cost of the entire project is expected to be £150 million, privately raised, without any reliance on grants or Lottery funding.

‘It would not be appropriate to comment at this point on the planning process, as we do not in any way wish to be presumptuous,’ says Kieran Hedigan. ‘All we can say is that we believe this project is unique and will transform an overgrown brownfield site. The Mullin would also bring economic, tourism, educational, cultural and heritage benefits to the region.’

Peter Mullin expresses similar sentiments. ‘All the elements that I’d write down on a blank piece of paper that get me excited about the automobile world, all the pieces are there with this project,’ he says. ‘I would say that there are so many benefits for the local community; let’s just hope that the community and the planners see it in the positive way that we do.’

Gallery: The Mullin at Great Tew