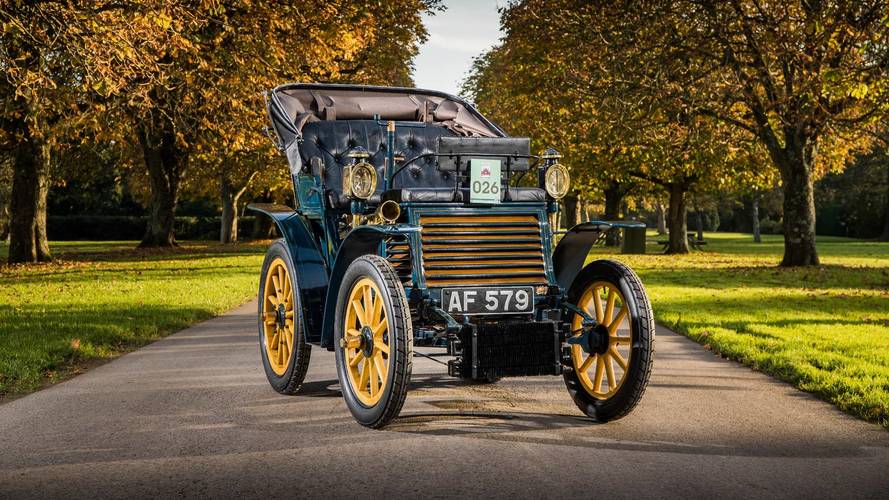 It’s 6am, it’s dark, it’s freezing cold and we’re trying to get the car started. The first order of business is getting those candles lit. Wait, what?

I’m standing in front of a Fiat 4HP, a park bench on cart wheels, a quilted leather seat with three-point-five horses underneath. It’s the first Fiat ever made, way back in 1899. Italy was a kingdom back then, ruled by a chap called Umberto I. This car’s survived 64 Italian prime ministers and two world wars.

I’m wrapped up as warm as I can manage, limbering up to get to the start line of the London-Brighton veteran car run in Hyde Park. It’s a bumper run this year, with around 400 cars entered to celebrate the moment in 1896 when the 5mph speed limit and requirement to have a man walk in front of your car with a red flag was lifted. Cars younger than 1905 aren’t allowed to take part – they’re basically tat.

But let’s jump back a week and visit the National Motor Museum at Beaulieu, where this car lives. I love this place – it’s full of historical cars, ones with interesting history – no, ones that have made history. There are firsts and lasts and records galore. I’m not here to look at the exhibits, though, I’m here to learn how to drive one. I’m led through top secret doors at the back of the museum to the workshop where all the magic happens. The mechanics here are car whisperers, they have vintage Duckhams flowing their veins. The smell in here is like your grandad’s garage, you could bottle it and sell it as pure nostalgia.

Everyone who works in here has an affectionate nickname and the sum of knowledge between them is priceless. We get a tour round the Fiat from senior engineer Ian ‘Stan’ Stanfield – it’s got tiller steering, a stiff on-off clutch with travel you could measure in millimetres, two brakes that don’t really seem to work and wooden wheels. 'Have you ever driven a vintage car?' asks Stan before I get behind the tiller for a bit of practice. ’Well, I did have a 1989 Volvo until the summer. It broke.’ If the flags weren’t waving for them at this point, there wasn’t much else I could do, short of driving this £200,000 antique straight into a tree.

Back at Hyde Park we’ve got the car running past the lake toward the start line, a steward waving us through to our slot up the front. No one seems to grasp the irony of needing someone to go ahead of us to clear the way, but at least there’s no flag involved. There’s a smattering of celebrities around the place – Damon Hill in a something-or-other, the squirrelly pair from The One Show with a bus full of terrified competition winners.

We sit idling on the start line – it’s not massively comfortable, it’s like being perched on roadworks. Suddenly our ace mechanic Michael ‘Sticksy’ Gillett appears round the folded hood of the elderly machine with a signal to cut the engine. The oil pickup belt is not turning the bits that slosh the oil properly, and the engine is starting to overheat. We sit off to one side as other cars take the start and Sticksy works his magic. Another attempt at a start gets us over the road to Marble Arch, but again we have to stop. A few minutes turns into an hour until we’ve got a replacement belt and we can get going. I can’t feel my toes, but the cheer from the crowd when we finally make our way towards Buckingham Palace is worth a few degrees of warmth.

It would be lovely to continue on from there with a glorious tale of grinning along all the way to Brighton sea front, pink cheeks and flies in the teeth, but the fact is that after being waved off by the adoring crowds and negotiating a busy traffic junction we broke down again. Another half hour later and we set off past a large Mercedes that had just dumped all of its oil in a smoking plop and an exceptionally spindly looking French number that had its driver shaking his head ruefully. There was someone who needed a Sticksy.

It was an admirable sight, passing along the Mall and through Whitehall, seeing the early morning mist drifting between the trees and picking up the rays of sunlight. Only this wasn’t an early morning mist, it was the raw unfiltered filth pumped out of engines dirtier than yo momma, motors that were put together back when life expectancy was nothing more than a state of hope.

Our engine was no different – at some point in the epic journey we noticed that it was sounding a little louder than usual. Usual being like standing next to a Boeing 747 being chased by a bear. It turned out the vibrations had shaken the endplate off the exhaust box – just one of those things on a vintage jaunt.

There was a curious symmetry here with the modern Fiat 500 TwinAir model – both have a two-cylinder petrol engine, although the new model is 875cc rather than 697cc like the 4HP. And of course it has a roof, doors, etc. The history books reckoned our car should be getting nearly 30mpg, but four tanks of petrol over 35 miles said otherwise. Discrepancies between claimed and actual mileage clearly aren’t a new issue then…

Driving the Fiat is no easy task either – imagine a version of that challenge to pat your head and rub your stomach, but you’ll die if you get it wrong. Or at least you’ll have a prized classic to account for. Steering is done via an awkward chest-high tiller, the throttle is a truculent brass handle near your legs that has about an inch less travel to it than you just moved it. The clutch is frankly anti-social and the gearlever like juggling with hand grenades.

Stan had already warned us during a training session at the motor museum in Beaulieu that the last time the car ran on the veteran run Lord Montagu slammed it into third and shaved off the gears on Westminster Bridge. This just a few minutes before he told us we’d have a 40 percent chance of making it to Brighton.

An optimistic assessment, as it turned out. Problem after problem, two lots of severe traffic and failing sunlight were conspiring against us. As we reached the halfway point at Crawley men on ladders were taking down the bunting from lamp posts, about as harsh a sign as you could hope for on a day like this. We’d ended up in a re-run of the tortoise and the hare, only the tortoise kept dying.

The closing gambit from the 4HP was a rupture to the fuel line. Driving out the other side of Crawley towards Pease Pottage services, where the Beaulieu team was waiting to service the car, the car sputted and stalled, coming to a standstill and further enraging the dozens of cars who were being held up through town. As we tried to crank the car back into life, shrieks met our ringing ears and we noticed the fuel dribbling down the road.

Sticksy worked further magic with a blowtorch whipped out of nowhere, but it wasn’t to be. No one has ever been so happy to see the grotty toilets and dank pastry lineup of Pease Pottage’s fine contribution to the service station oeuvre. Nine hours and 35 miles – walking would only have been marginally slower – after setting off from Hyde Park we’d driven the Fiat further than it had gone in many decades. It hasn’t seen Brighton yet…but there’s always next year.

For a more measured assessment of the day's events, check out co-driver David Lillywhite's account on AutoClassics.com. Thanks to Fiat UK and the National Motor Museum at Beaulieu for making it (almost) happen.