Everything you need to know about Bloodhound SSC 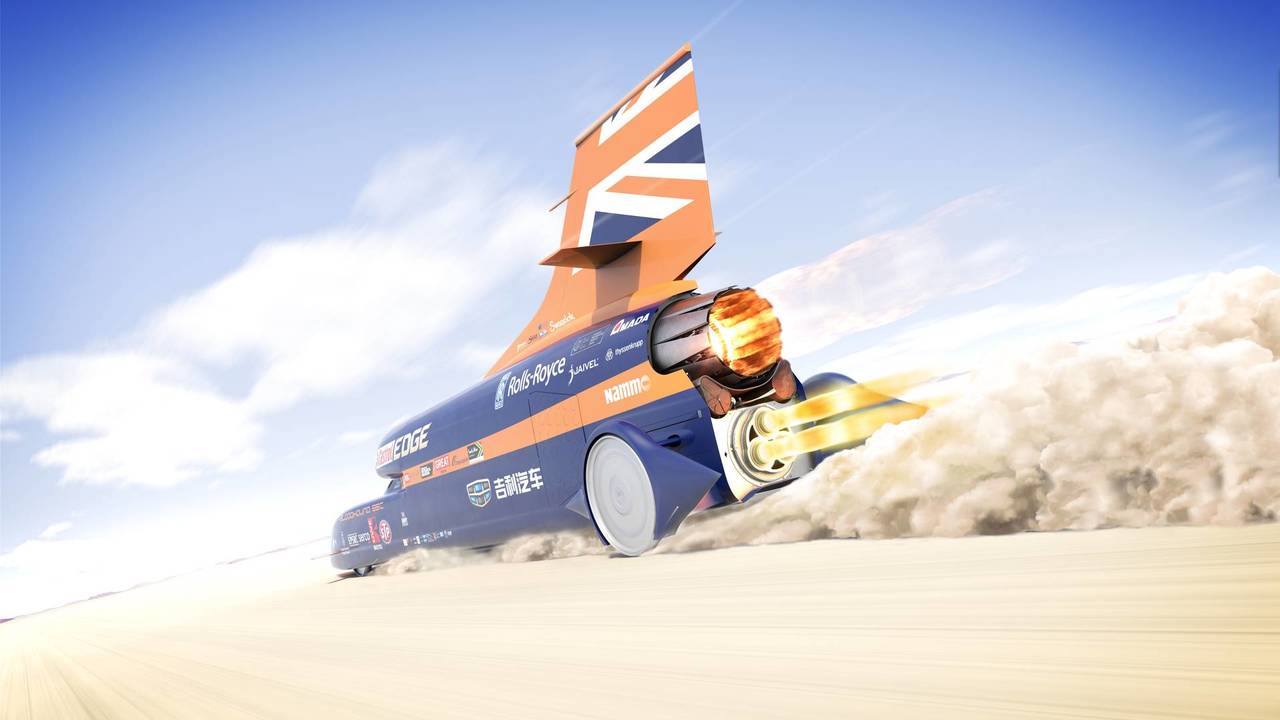 Run away from anyone who gets this car in the Top Trumps shuffle.

You’re going to be seeing a lot about Bloodhound SSC in the news over the coming years. It’s Britain’s latest effort at taking the world land speed record, one it set in the 1990s with Thrust SSC – essentially a tube with two massive jets attached to it – achieving 763mph. Bloodhound is hoping to smash Thrust’s SSC’s record by topping 1,000mph. But why? Why is Britain having a go at beating its own record? And why is it important? Well, here’s everything you need to know.

It uses the engine from a fighter jet… and a rocket

Topping 1,000mph requires some serious grunt, so the only way to go faster than Thrust SSC is using fighter jet power. Its headline engine is a EJ200 jet from the Eurofighter Typhoon. The unit itself was past its useful flight time and destined to live in a museum, but it was donated to the Bloodhound SSC project. Thing is, the EJ200 won’t get the car to 1,000mph on its own, after its got the car up to 300mph a hybrid rocket will/should push the car all the way up to the magic quad figure target. Oh, and the fuel pump for the whole shebang is a V8 engine, not too dissimilar from one you’d find in a road car. Think your motor’s fast? Bloodhound uses it as a basic part.

It’s all about education

Barring a few technical secrets involved in the military-grade fighter engine, Bloodhound SSC is open source and used for education at all levels from the youngest school aged kids all the way to PhD level. Designed to get kids interested in going in to Stem subjects (science, technology, engineering and mathematics), a number of projects and activities have been devised, most notably: building mini rocket cars to race at school. At the other end of the educational scale, the computational fluid dynamics used to calculate how Bloodhound will behave are available to all who need them for study.

The steering wheel is 3D-printed

Only one person will drive Bloodhound in anger: Wing Commander Andy Green. Having taken Thrust SSC to record-breaking speeds he knows what he needs to keep very fast things in very straight lines.

To ensure he has maximum control, the steering wheel has been fitted exactly to his measurements. After all, he’s the only one who’s gonna be driving the thing.

Bloodhound is named after a missile

Bloodhound SSC is aiming to exceed 1,000mph, or Mach 1.3. When it came time to decide on a name for the project a few options were discussed. Eventually a perfect name was reached: Bloodhound. A surface-to-air missile from the 1950s designed in Britain. It, coincidentally, could reach Mach 2.2.

The final run area has been ‘cleaned’

When Bloodhound does its final run on the Hakskeen Pan in South Africa it’ll have a 12-mile long, nine-mile wide area to play with. However, it’s an area with a fair amount of lumps, bumps, and rocks to contend with.

You ever play Top Trumps? Then hope your next opponent doesn’t have Bloodhound SSC in their deck. Its power output is roughly equivalent to 135,000bhp, or 435.5 Volkswagen Golf Rs.

There’s more as well… the rocket will reach 3,000 degrees centigrade, twice as hot as the inside of a volcano; if Bloodhound were to be launched vertically it would reach 25,000 feet, when it’s going at 1,000mph there’s 20 tonnes of drag on the car, and its EJ200 jet engine gets through 64,000 litres of air a second – enough to suck all the air out of a house in three seconds flat.

Oh, and if the run is successful and the 1,000mph target is hit, it’ll be the biggest incremental land speed record break of all time, at 33 percent.

Andy Green has no fear

When asked in an interview if going that fast is scary, Green commented that it really wasn’t. He certainly has previous experience of very high speeds, but there’s also a lot of test runs to take in to consideration.

Bloodhound will be taken to incremental speeds to see how it performs, and to see if any adjustments need to be made for it to go faster safely. It won’t simply be put on Hakskeen and sent on its merry way. But still… you’d be a bit nervous, wouldn’t you?

Bloodhound’s first test run is taking place in Cornwall in October 2017, where it’ll hit 200mph. The final run is scheduled to take place in 2018.

Watch this guide to Bloodhound with Motorsport.com's Flying Lap team