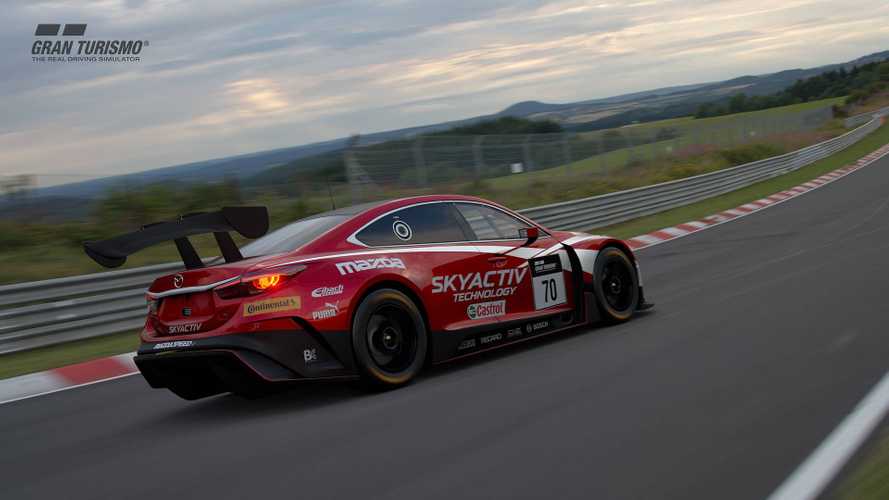 Gran Turismo is back, and this time it has no number suffix, but the word ‘Sport’ instead. Usually when something automotive has ‘sport’ in the name it’s cause for eye rolling (Seat Altea Sport, I’m looking at you), but here it’s perfectly apt because, well, racing game.

GTS is a huge game that promises a sprawling career mode, online functionality and much more besides – which is why rather than try and sum the whole thing up in one big review and hope for the best, I’m going to be updating as I play. It’s also ideal for the first part because when I got my copy up and running the servers (and therefore any online functionality) were down for maintenance and I could do naff all.

No online means nothing more than arcade mode to play with, and as I’ve only just started out that means a handful of quickish cars and a whole five tracks: an oval, two twisties and a couple of dirt stages.

Irksomely, thanks to Motor1 needing to run off and review cars I won’t be around for a couple of days to play, so by the time launch rolls around I’ll be joining in with the rest of the world. Still, some playing in arcade mode has thrown up some interesting titbits.

…But it renders each player’s screen side-by-side rather than one on top of the other. Seems like a minor gripe, right? Well… it isn’t. See, to fit a decent view of the track, etc, in you end up with about a sixth of the screen each, with black bars containing speed, lap and other details above and below. If you’ve got a small TV you’ll be best off sticking to competitive time trials with your mates.

Drift mode is hilarious and punishing

Get something rear-wheel drive, hit a dirt stage (tarmac stages are also available...but, dirt) and go nuts. Big drifts are easy to start and hard to perfect, but therein lies the challenge. You keep going back for more and more and more trying to top your last score. It’s hilarious and a good ‘pass the controller’ mode so everyone can join in the fun.

Even on hard mode, the single race AI isn’t that exciting. You’re popped on to your track of choice in 11th place out of 20 and told to win. Points, experience and cash are up for grabs depending on how highly you place, so there’s an incentive to do well. However, your rivals are all suspiciously smooth – eerily so. Gran Turismo games of old featured an AI procession to fling yourself around, and while Gran Turismo Sport's competitors don’t form a solid queue to pass, you feel like you’re the only one out there actively trying to take gold.

Rubber up if you want to win.

With everything set to ‘basic’ your customisation options are pretty much limited to how much traction control you want, whether the game will help with braking and steering (handy for novices, a pain otherwise), and tyres. Now, it’ll pop you on some ‘hard’ sports tyres from the off, and you’ll find that any driving approaching ‘spirited’ will see you understeering off the track at pretty much every corner. Switch those nasty things out for some ‘racing soft’ rubber and you’ll dance rings around your opposition. As they’re all a bit dim anyway, a win is like taking candy from a baby made of code.

GTS is a simulation racer. It’s not arcade and bright and bouncy, it’s serious. Much like a guy who turns up to kart track with his own helmet and race suit, it’s to be respected because while taking anything in life too seriously is to be avoided at all costs, he likely knows what he’s doing and will easily beat you.

An understanding of the basics of car control will take you a long way in GTS. While you can’t physically feel what the car is doing, you can teach yourself how to drive very smoothly and very quickly with practice, time, and, as mentioned, a basic idea of how cars work.

The Hyundai Genesis I spent most of my time playing in looks very much like the real thing. Incredibly so. In fact, GTS managed to render something so stunning telling it apart from the real thing is a hard job. Now, I’ve never driven a real one, but I’ll bet you the gearbox is nowhere near as slow as the in-game’s manual transmission mode. Nor is the car as wallowy.

Or maybe it’s bang on and the Genesis simply exists to look good and make nice noises. Still, in keeping with Gran Turismo tradition, even if the entry-level cars aren’t as basic as they used to be, they feel a bit cack to drive.

My eyes. What have you done to my eyes?

Holy hell, GTS is pretty. It’s stunning. Running on 4K HDR on my telly it was simply incredible to look at. While races aren’t as pretty as their replays, the rest is just beautiful. I can’t wait to get stuck in to photo mode and see how good it can get.

OK, my access to what the game has to offer has been limited because of pre-release server issues and I’m not going to get much time with it until the game’s full-fat launch. What I’ve seen, however, has been solid.

The cars feel real, the whole thing looks incredible, and I’m looking forward to seeing what comes next. The cars list at the moment is a tiny 162 at launch (Microsoft’s Forza 7 has over 700, FYI), and there are 38 tracks to toy with at the moment.

Not a huge amount in the grand scheme, but DLC will be around to fix that soon. If you’re in to your motors and want a hardcore sim this should be just up your alley. I’m looking forward to getting stuck in properly and seeing what Gran Turismo has to throw at me.