Six things we know about the 2018 Aston Martin Vantage 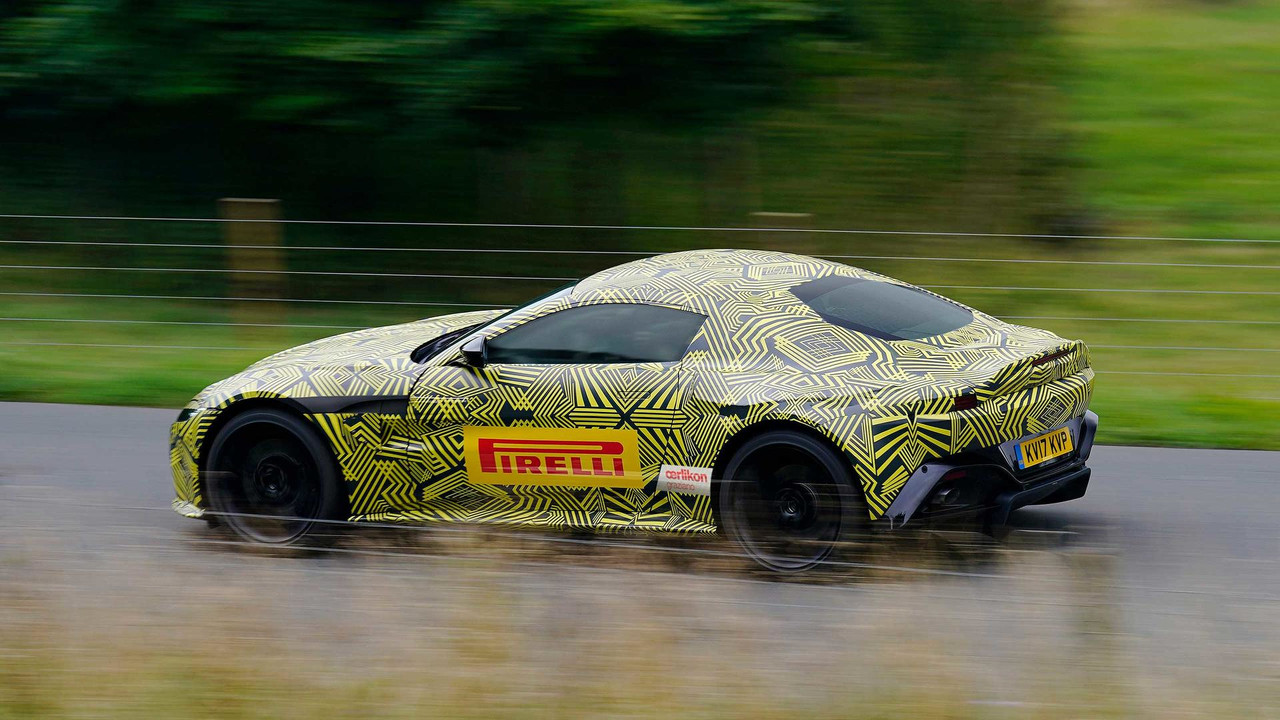 Aston's latest and greatest is on the way.

The all-new Aston Martin Vantage is expected to be unveiled before the end of 2017, but there’s already plenty of details to share on the brand’s core sports car. Motor1 hasn’t just seen the new car testing on UK roads, we’ve been speaking with company bosses to get the lowdown on its replacement for the best-selling model in Aston’s history.

It will look like James Bond’s DB10, with a hint of Vulcan

In recent years, Aston Martin has been accused of building a model range that looks too similar. According to chief creative officer Marek Reichman, this clear design language was a tactic needed to help rebuild Aston’s brand identity and put it back on the global map. Getting Bond back into the driver’s seat has certainly helped, too…

Now, however, it’s play time. The plan is to both visually and dynamically separate the character traits of Aston’s Sports, GT and Super GT series. CEO Andy Palmer has given Reichman the brief to make its cars different enough so that his mother can recognise the differences between the models in the range. If you thought the DB11 ushered in a new era of modern design for Aston Martin, then the Vantage will go even further.

Even the camouflage of the prototype car the company has been testing with fails to hide the rakish yet muscular proportions and narrow headlights inherited from James Bond’s DB10, while the new Vantage also adopts a Vulcan-esque inverted grille.

The V8 will launch the Vantage range, but a V12 is coming

The new Vantage will be built around a shortened version of the DB11’s aluminium platform. It’s expected to launch with a 500bhp version of the AMG-derived, twin-turbo 4-litre V8 that also appears in the DB11. That’s more than the 430bhp produced by the current, naturally-aspirated V8 Vantage, and will help cut the 0-62mph sprint time from 4.8secs to nearer four seconds.

However, this is just the start. We know the Mercedes AMG GT sports car already squeezes 600bhp from the same V8, so there is bandwidth for Aston Martin to present a more powerful Vantage S derivative. And just as the DB11’s engine bay has not just the width to accommodate a 90-degree V8, but the length to house a 60-degree, 5.2-litre V12, the same packaging concessions have been made for the front of the new Vantage. A successor to the V12 Vantage has cult car written all over it.

Aston Martin’s collaboration with the prestigious Italian design house began with the beautiful DB4 GT Zagato racing car of 1960. Only 19 examples were ever made and the limited edition models that followed – the 1986 V8 Vantage Zagato, 2002 DB7 Vantage Zagato and 2011 V12 Vantage Zagato – were almost as rare and fleeting.

Since CEO Palmer’s arrival in 2014, Aston has been keen to tap into this rich vein of heritage, presenting more Zagato collaborations in the last two years than Aston has mustered in half a century. The Zagato badge is expected to make a regular appearance on the Aston Martin product roadmap, so we’re expecting a coupe version featuring the unmistakeable ‘double bubble’ roofline (originally created to accommodate racing helmets), and a speedster version to compliment the standard Vantage Roadster. The Zagato models will remain incredibly low in volume, stratospherically high in price and hand assembled in Gaydon.

It will have a track mode

Part of the character differentiation between Vantage, DB11 and Vanquish will lie in the former’s sporting nature. Whereas the DB11 is classed as a GT car, has space for four (kind of) and features GT, Sport and Sport+ driving modes, the Vantage will have a more focused outlook.

It will be a strict two-seater and feature Sport, Sport+ and Track driving modes (no GT mode) to assert its sportier intent. Don’t expect cruise control on this Aston – it will be more aggressive to drive than its predecessor, with a sharper throttle response, heavier Electric Power Assisted Steering (EPAS), firmer spring and damper rates as standard, with shorter travel in the brake pedal. It is also expected to be both lighter and more rigid than its predecessor, improving agility.

The race car is expected to arrive first

The V8 Vantage has been of great service as a World Endurance Championship (WEC) race car, and its recent Le Mans 24 Hours victory with Jonny Adam, Darren Turner and Daniel Serra at the wheel of a works car in British Racing Green was the ultimate send-off.

The new-for-2018 FIA GTE V8 Vantage race car therefore has a lot to live up to, and has already been spotted testing at the Rockingham Motor Speedway by Sportscar365. It’s understood a GT3 variant of the car will follow, but isn’t due until 2019.

You’ll be able to order one with a manual gearbox

'The manual gearbox remains an integral part of our product plans and will do for many years to come.' These are the reassuring words of Aston Martin CEO Andy Palmer, so we’ll eat our hat if the new Vantage isn’t offered with a choice of either a six-speed manual or dual-clutch automatic transmission.

Another less-than-subtle hint to this decision is the supplier logos that have been emblazoned onto the mule cars: you’ll see a nod to Pirelli tyres on one side, with Oerlikon Graziano on the other. Graziano is the Italian company that currently supplies manual transmissions for versions of the current Vantage. It also makes dual-clutch transmissions for high-performance cars, which would be a first for Aston Martin. However, because Daimler now owns a five percent stake in Aston, it’s unsure yet as to whether the Vantage will use a Mercedes automatic transmission or a unit from Graziano.