TVR Griffith vs Porsche 911: The Numbers 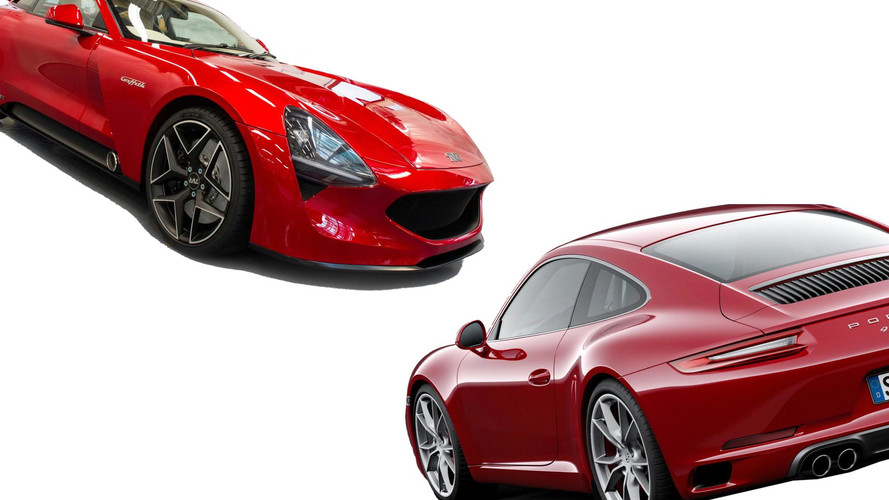 How does the new TVR stack up on paper against its most accomplished rival?

A classic British sports car manufacturer has been revived – we were never actually sure whether it would really come to pass, but finally TVR has revealed its new Griffith sports car to a slightly over-excited press at the 2017 Goodwood Revival.

No car is launched into a vacuum, however, and the Griffith is going to face stiff competition from some of the most talented and accomplished rivals in the business. Let's see how the new TVR stacks up on paper against the world leader in the sports car arena.

In the red corner, we have the brand new TVR Griffith Launch Edition. It's so new no one has even seen it driving yet, but we're sure they've tested it so don't worry. It's got 70 years of TVR history to uphold (although much of that was spent not doing anything) and a grand reputation of lairy antics, terrible build quality and a strong smell of industrial adhesive to uphold.

In the blue corner, we have the Porsche 911 Carrera S Coupe, pride of Germany. It has been in production for 54 years and in those six decades has barely changed. Alright, they've added air conditioning and better seats, but the rear-engined, rear-wheel drive format persists. The 911 has a grand reputation of refined antics, delightful build quality and a strong smell of success to uphold.

Who wins? On paper it's a heart versus head call – do you like your engines naturally aspirated or turbocharged, lightweight or with a little middle-aged spread? And just think of what you could do with those extra 30 miles from the fuel tank in the Porsche.

Look at the pictures and the Porsche wins hands down – we're not entirely convinced by the styling of the new Griffith, but perhaps we need to see it on the road to judge. On our road, in fact. That would be nice.