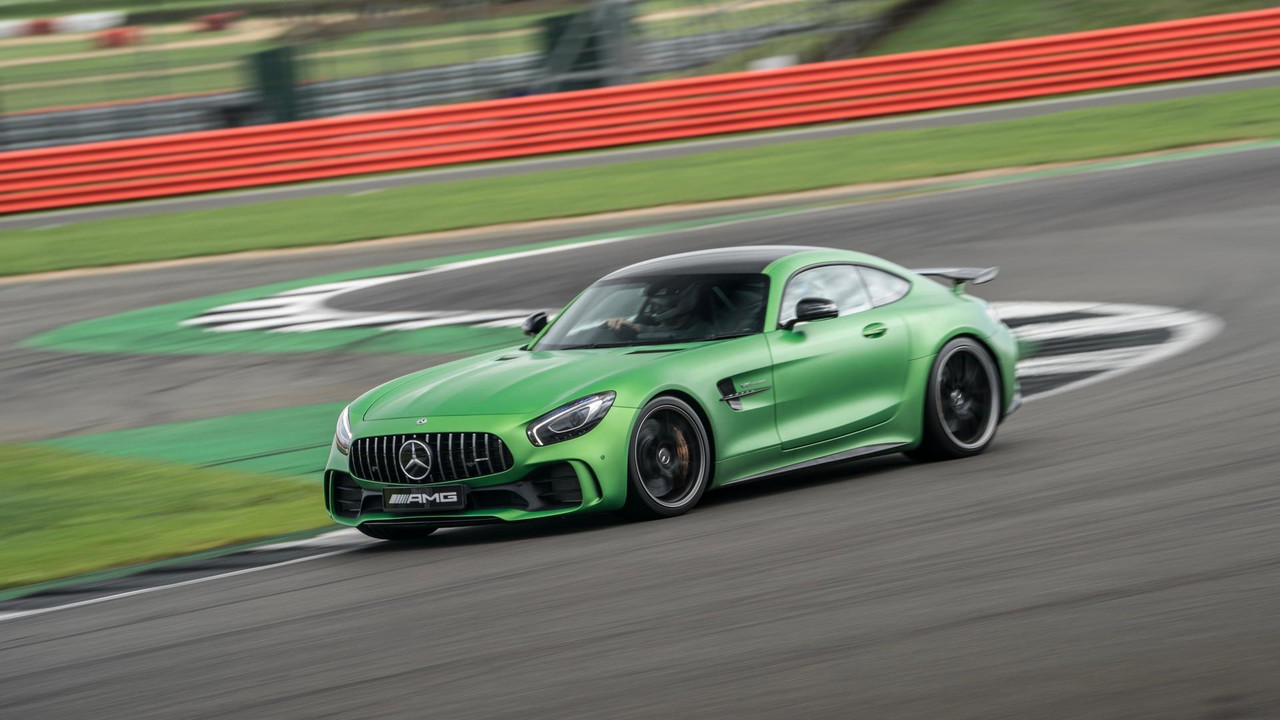 The Mercedes AMG GT R. The long bonnet, the toothy grille, the fixed carbon-fibre rear wing… Many would classify it as a top-end sports car, but there is real supercar swagger here. And that’s before you fire up the 577bhp 4-litre V8 that burbles away mutinously even at idle.

It’s got serious bragging rights, as well, the AMG GT R. Because this is the car that lapped the Nürburgring faster than any other rear-wheel-drive production car at the end of 2016. It posted a time 10 seconds faster than a Ferrari 488 GTB.

Appropriately, then, it’s a track that I find myself at for this – my first encounter with the GT R. Silverstone's GP circuit to be precise, and what a place to be allowed to unleash the most intense AMG model in production.

Everything about the AMG GT R shouts that it should be a lunatic; the looks, the noise, the general bullish attitude. But the reality is that it’s remarkably well-mannered up to a point.

A wider rear track, bespoke suspension and rear-wheel steering are the most significant engineering upgrades over the standard AMG GT, beyond the extra 107bhp pouring from the R’s angry V8, so it’s no surprise that it serves up a really aggressive turn-in.

Something I find particularly telling as I swing into Stowe – a fast right-hander that the GT R claws through with intense grit and precision. Provided you don’t deliberately provoke it into tyre-destroying skids, you can enjoy fairly towering grip levels that reduce the need for egg-shell throttle control and regular oversteer management that I had presumed would be part and parcel of getting this car around such a fast circuit.

Perhaps it’s that cornering deftness, the quick but satisfying steering response, and suspension that keeps the GT R’s body ruthlessly in check without making it feel so stiff as to be useless on the road (not that we’ve tried it away from the track yet), that gives the whole thing a rather unexpected layer of sophistication. A suaveness that is at odds with the lairy looks and performance.

But not enough suaveness that you aren’t going to be utterly absorbed by that engine. This is one of the loudest, angriest-sounding cars I’ve driven. And that includes the SLS Black Series that I’d driven the very same day.

Even at idle the AMG GT R merely sounds outraged. Muffled, but still outraged. It chunters away, rumbling mutinously. But it’s still there. Waiting. Ready for you to snick the drive modes dial and unleash it.

And that’s when the 4-litre twin-turbo reveals its true nature. It’s never quiet or calm, the AMG GT R, but the sustained aural assault and the sheer forcefulness of the V8 defines its vaguely delirious, hedonistic character.

Sure – the grippier, more precise handling is a real joy, but this car is still all about the noise, the looks and the sheer overwhelming drama of it all. There’s something animalistic about it.

That’s never more obvious than on Hangar Straight as I squeeze the throttle on and revel in the wall of furious V8 noise that batters at you. The GT R’s 0-62mph of 3.6 seconds might sound less than devastatingly rapid in the context of modern supercars, but it’s the brutal mid-range and long, sustained, ever more hectic rise of revs that you’ll crave.

Of course it’s got plenty to prove against an Audi R8 or McLaren 540C, but it’s also a demonstrably different proposition. A cacophonous, brilliant, irreverent character all of its own.

And on that note – what a way for AMG to see in its 50th year. Here’s hoping that the 100th will be just as unashamedly extrovert and emotive.