Everything you need to know about the Jaguar D-type 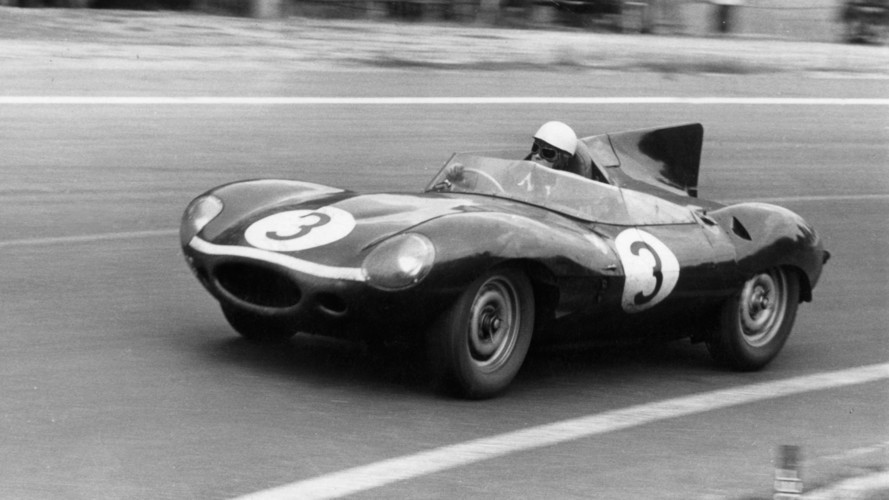 This car is a legend on four wheels.

The Jaguar D-type is one of the most iconic cars in motorsport history. Packed with innovation, this sports car was designed to take on Ferrari and win the legendary Le Mans 24-hour race.

Here is everything you need to know.

The Jaguar D-type might share components with its forerunner, the C-type, but the new car was something of a revolution in design. Instead of a conventional space frame made of tubular steel, the D-type introduced a magnesium alloy monocoque.

Lighter and more rigid than a space frame, the monocoque then had a subframe for the engine welded onto it. This ethos of building the car around a monocoque was so far ahead of its time that modern racing cars still do it today.

Aircraft had a huge influence on Jaguar D-type design. Its monocoque was developed from an alloy used on World War II fighter planes, the fuel tank was a deformable bag found in aircraft and its complete set of Dunlop disc brakes – ushered in by the C-type – were an innovation from the world of aviation.

However, the car's strongest aeronautic ties are the most obvious. The alien-looking craft was design by a man named Malcolm Sayer who joined Jaguar from the Bristol Aeroplane Company. He knew the value of aerodynamics.

The streamlined shape was honed in a wind tunnel and the car’s iconic fin was added to increase stability at speed. Drag was greatly reduced by making the front of the car smaller, but this presented another problem… The 3.4-litre engine didn’t fit. The solution was to offset the motor by 8.5 degrees and fashion a bonnet bulge.

Racing is in Jaguar’s DNA and so there were high hopes for the revolutionary D-type. It made its debut at the 1954 Le Mans 24 Hours, but things didn’t go smoothly.

The cars were being starved of fuel by issues with their fuel filters. Time was lost in the pits as engineers scrambled to remove them and send the cars back out. A heroic drive by Duncan Hamilton and Tony Rolt propelled their D-type to within a lap of the lead Ferrari by the time the chequered flag was waved.

A valiant effort, but not the dream start Jag had been hoping for. Engineers took solace in the fact that the D-type had proven itself to be considerably faster than the Ferraris. Its top speed exceeded 172mph.

A few weeks later the D-type would claim its maiden victory at the 12-hour race at Reims.

Jaguar firmly set its sights on outright victory at Le Mans for 1955. Sayer and his team worked hard to developed the aerodynamics further and came up with the 'long nose' configuration.

Long nose cars were seven and a half inches longer than their predecessors thanks to an extended nose and tail fin. This enhanced design allowed the car to cut through the air at speed with minimal resistance.

The 1955 Le Mans 24 Hours had the makings of motorsport greatness. Stirling Moss had joined Fangio in the Mercedes team, Ferrari was looking strong and Jaguar had procured Mike Hawthorn. Hawthorn had already proven to be a world champion grand prix driver in the making, and so he and the D-type were a perfect fit.

The opening hours of the race were tense with the top cars battling it out. It was a thrilling spectacle that would be tainted by disaster.

As Hawthorn pulled into the pits, simply a section at the side of the road back then, he cut across the path of another car causing it to swerve. Pierre Levegh’s Mercedes was closing fast and collided with the slower car. Chunks of Mercedes debris thundered into a packed spectator stand killing 83 and seriously injuring 180 more.

Mercedes retired all of its remaining cars and this tragic incident caused the three-pointed star to leave motorsport altogether.

It was usual practice to continue the race back then. Hawthorn’s D-type went on to win.

Top step of the podium

D-types continued to take multiple victories around the world, both in the hands of Jaguar and customer teams.

Mike Hawthorn drove the car to first place in America during the Sebring 12 Hour race.

Jaguar temporarily retired from racing at the end of 1956, but the D-type wasn’t done yet. Now with larger a 3.8-litre engine, 1957 would become the car's most successful year.

D is for dominance

Jag was not officially running a factory-backed team in the 1957 Le Mans 24 Hour race, but it did support a few others running D-types.

With its new engine the car was unstoppable and totally dominated the event. Jaguar D-types finished 1st, 2nd, 3rd, 4th and 6th.

The historic victory celebrates its 60th anniversary this year.

When Jaguar temporarily retired from racing at the end of 1956 it still had some unfinished Jaguar D-types, which were converted into the rare XKSS.

The cars were still racers under the skin but a fabric roof, passenger seat and windscreen allowed them to race in America as production sports cars.

Just 25 were set to be built, but a fire destroyed a large part of Jaguar’s Browns Lane factory, destroying nine XKSSs in the process. The tools required build the cars were beyond repair and so ended XKSS production.

In 2016 Jaguar built the nine lost cars to the exacting specifications of their original plans – 10,000 man hours went into every car to recreate every stitch and rivet.

Cat that got the cream

The car's history, motorsport success, and rarity make it something of a unicorn for today’s collectors.

Estimates on how much a D-type is worth fluctuate, but the first factory car sold at auction for £2.2m in 2008. In 2016 the 1956 car that won Le Mans went to auction and sold for over £16.8m. It is currently the most expensive British car ever sold at auction.