Everything You Need To Know About The 2017 Frankfurt Motor Show 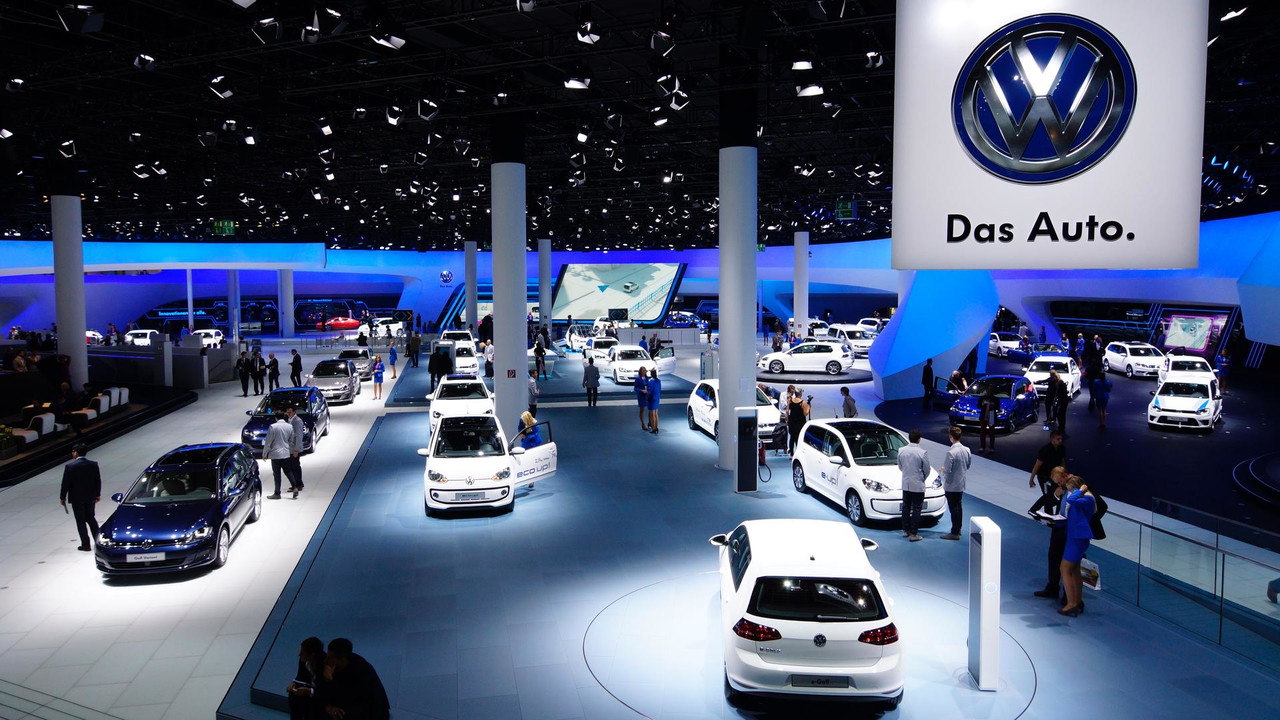 All the latest information on new reveals and exciting launches from the 2017 Frankfurt motor show.

The Frankfurt motor show takes place every second September in the back garden of Volkswagen, Mercedes and BMW. In many ways, the big story of the Frankfurt motor show in 2017 is that so many manufacturers aren't there, including Alfa Romeo, DS, Fiat, Infiniti, Jeep, Nissan, Peugeot and Volvo. Still, more cake for the rest of us, and scroll down below to see all the information about the cars that have been revealed at Frankfurt.

What’s being revealed at the Frankfurt show?

The new A8 is on the company's stand, looking resplendent with its chrome grille, and there are debuts from the RS 4 Avant and the R8 V10 RWS, which stands for Rear Wheel Drive Series.

Bentley
The latest version of the Continental GT has been revealed at the Frankfurt show. It looks even better in the metal than the pictures give it credit for, with a sinuous and beautiful design. We can't wait to get behind the wheel.

BMW
If it gets a bit quiet on any of the other stands, you need only head to BMW to see some action.

By far the biggest stand at the show, the Munich-based car maker has taken over a whole hall to show off its full range as well as that of subsidiary Mini. Making their debut at the show are the new 6 Series GT, the new X3 SUV, a seven-seat X7 concept and the perfectly delightful Z4 concept.

For a glimpse into what's to come from BMW, there's also the i Vision Dynamics concept, which will become BMW's answer to the Tesla Model S, and will likely be badged as the i5.

Perhaps the most interesting of the new BMW production cars on show will be the i3S, a hot-hatch version of the i3 electric vehicle. Looks like BMW found a new niche to fill.

A more crowd-pleasing launch is the new M5, which was officially revealed a few weeks ahead of the show, or - finally - there's the astonishingly good-looking BMW M8 GTE endurance racer.

Chery
Chinese manufacturer Chery has revealed a new SUV line at Frankfurt – it wants a piece of the global car sales action and it isn't afraid to come up with a product that will appeal across a broad cross-section of the car-buying public.

Dacia
We like the Duster. It's been around since 2012, although its budget interior styling looks like something from the 1990s. An all-new car is just what the doctor ordered – but don't expect Dacia to tinker with the formula too much.

Honda
Honda tried out hybrid technology early on, but then it ditched the concept before having a rethink. Cripes, it gets complicated. Let's keep it simple with an all-new CR-V SUV being launched at Frankfurt, which will have a hybrid powertrain option.

The star of the Honda stand – and perhaps the show – is arguably the Urban EV concept, which doesn't present a far-off vision, but is actually slated to go into production in 2019. We're quite excited about this one.

Hyundai
We've already had a good poke around the new i30 N hot hatch and we liked what we saw. Frankfurt marks the public debut for the new effort from South Korea – also on the stand is the company's new Kona SUV.

Jaguar
We've already seen the new E-Pace SUV do a barrel roll at its launch event – can Jaguar top that in Frankfurt? No, no it can't.

Mind you, it can launch a new I-Pace eTrophy race car that will be used for a one-make series to support Formula E in the 2018/19 season. It's the first pure-electric production car race series in the world, and it will be hilarious to watch.

Kia
Kia describes its shooting brake-style Proceed concept as an 'extended' hatch, but whatever it is it looks pretty decent.

It seems like ages since we got a first look at the new Stonic SUV, but Frankfurt marks the car's official public debut. We'll also be driving the car shortly, so keep an eye out for the first drive.

An interesting model from the Korean manufacturer is its new SUV-a-like Picanto. Because no one ever went wrong trying to jack up the suspension and add some grey plastic bodykit...

Mercedes
The big news for the three-pointed star at Frankfurt is the AMG Project One Hypercar, which will use the same powertrain setup as you'll find in Lewis Hamilton's F1 car. Slightly drier in a rainstorm though.

Mercedes has also brought along the facelifted S-Class coupe and cabriolet and presented a glimpse of the future in the form of the EQA Concept.

This pure-electric hatchback should make showrooms sometime around 2020 with a 249-mile electric range. It's set to take on the likes of the BMW i3.

Last but not least is the new X-Class pickup, which has had its European debut on the Frankfurt stand, too. And looks surprisingly good in the metal.

Mini
The diminutive British manufacturer (in name, if not in size) has revealed the rather unimaginatively named Mini Electric Concept.

You'll be surprised to know that it's a Mini electric concept that previews the electric Mini hatch due to go on sale in 2019, built in the UK.

Or if you've already had enough of electric stuff, there's the refreshingly non-electric, all-fun Mini John Cooper Works GP concept to have a look at, too.

Porsche
Well, it only feels like yesterday we were all arguing about whether the new Cayenne would pollute the Porsche brand irrevocably and now we're on to the third generation of the monster SUV. They grow up so fast.

The arrival of a Porsche 911 GT3 Touring Pack was a surprise – 493bhp just like the GT3 we know and love, but minus the wing.

Renault
It feels like Renault has been teasing the Renaultsport Megane for ages, and now we finally get to have a proper look. Its predecessor was one of the most deliriously brilliant front-wheel drive hot hatches, ever, so no pressure on this one, then...

It's not only hot hatches on Renault's stand - there's also the rather intriguing Symbioz concept. Part car, part extra living space in your house, this is the French brand's vision of what transport in 2030 might be like, including a 310-mile electric range and full autonomous mode, of course.

The fairly small Arona SUV wears a familiar face – it looks very much like the Audi Q2, but given how much it shares with the car we'll forgive it that. We're looking forward to driving this Nissan Qashqai rival to see how it squares up against the competition.

Another Frankfurt debut from the Spanish firm is the Leon Cupra R, with its copper accents and extra horsepowers. In fact, it's the most powerful car that Seat has ever produced.

Suzuki
We've had a few glimpses of the new Swift Sport, but the much-anticipated hot hatch from Japan will have the wraps taken off in Germany. Another one to add to our looking-forward-to-driving-in-2018 list.

Vauxhall
The performance version of the Insignia, the GSI-badged variant, has been teased to the world but won't be unveiled until Frankfurt. Another addition to the range will be the Grandland X, a small SUV that sounds like a hip-hop album.

Volkswagen
We've already driven the car, but Frankfurt marks the public debut of the all-new and slightly massive Polo. We've already seen the new Golf-on-stilts T-Roc, which looks very sharp, but that new SUV is taking its public bow at the motor show.

VW CEO Matthias Müller has used the opportunity of the Frankfurt show to commit his company to becoming the leading e-mobility manufacturer by 2030 – Volkswagen has got a massive 80 electrified models on the way between now and 2025.

You can! It would be a shame to leave it all just for the journalists to enjoy. After the kerfuffle of the two press days, Messe Frankfurt is open between 7am and 9pm from 16-24 September 2017 for members of the public to enjoy the latest metal. Day tickets cost from around £13 on the door, but you can save if you book in advance.

The show venue is a convenient 15-minute walk from the main train station In Frankfurt, so you can fly in or even get the train all the way from the UK if you really like. If you drive an electric car, you get free parking at Messe Frankfurt, so that's nice.

There are test drives available, a gallery of 1970s-era vintage cars, activities for children and even a jobs fair for automotive industry careers. Check out iaa.de for full details.

Where can I see all of the news from Frankfurt?

It's like we're writing these questions ourselves. We've got all of the latest news and video content from the Frankfurt show – if you want to see all of the stories as they come in, keep a weather eye on our special Frankfurt show page where everything will be displayed.

Otherwise bookmark this page and we'll be updating it as we get more information.