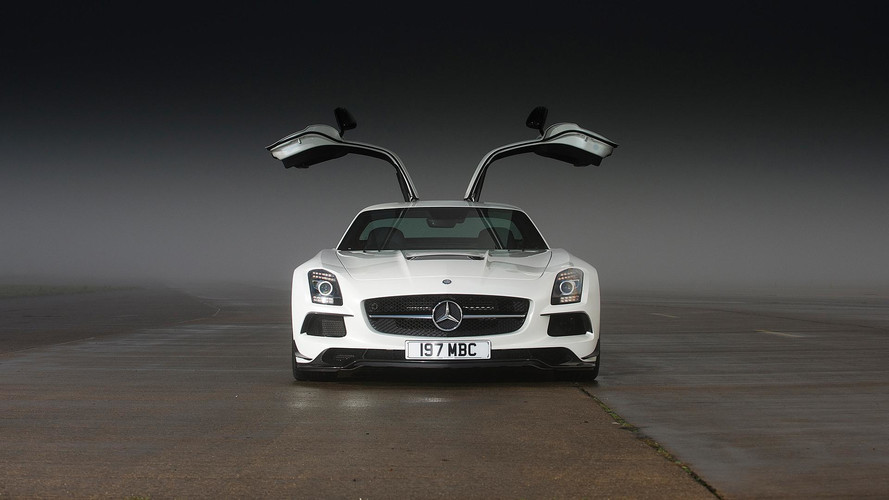 The Mercedes SLS AMG Black Series. All 622bhp V8, gull-winged magnificence of it. Sitting and exuding a quiet, expectant sense of menace in the pit lane of Silverstone’s GP track. If it could speak, it would say 'I dare you'.

That attitude never goes away in this, the most concentrated version of Mercedes’ already museum-worthy SLS supercar.

Even as I lifted the gullwing door, dropped inelegantly into the snug, deep-sided bucket seat, clambered half-out again to reach the door handle, and sparked the V8 to thundering life. Even as I hit the brakes hard for the hairpin at the end of Hangar Straight. Even as I swung the car’s bow (‘bonnet’ just doesn’t do justice to the graceful acreage of the SLS’ nose) through the tight double-apex of Luffield… There was always a sense that the grenade was ready to be thrown. An edgy, thrilling tension that the SLS might pull the pin and blow you to pieces any second.

Which, to be honest, is a little unfair. After all, the SLS is not actually that much of a handful - even the Black Series, which at 1550kg is 70kg lighter than the standard SLS and had the highest power-to-weight ratio of any AMG when it hit the road in 2013.

That weight-saving came courtesy of lashings of carbon-fibre throughout the powertrain, amongst a few other tweaks. To further differentiate it from its lesser stablemates, the Black Series also had wider front and rear tracks, new air-intake and exhaust system, heavily tweaked suspension, a lower-set seven-speed dual-clutch gearbox, and that wondrous, naturally-aspirated 6.2-litrre V8 was turned up to peak speeds of 8,000rpm (up from 7,200rpm in the standard SLS). Sure, a 0-62mph time of 3.6sec and top speed of 196mph isn't that impressive in the supercar field these days, but d'you care? I certainly don't, and neither should you.

In a car this wide and this low (it's wider than an S-Class), and with monstrous 325-section rear tyres, it’s not surprising that it has a lot of lateral grip. Even jinking through the fast switchback of Maggots and Beckets, the SLS Black Series feels surprisingly wieldy and precise. Visceral, but communicative enough that you can drive it at eight-tenths with fair confidence straight away.

And you will drive it with vigour straight away, because you will be desperate to feed your addiction to the engine noise. Oh, happy, happy days - the engine. The way this engine sounds and builds pace, is the SLS's real star turn. Rumbly and lazy at first, building to angry and frantic through the mid-range as you get more white-eyed and sweaty palmed, before you eventually reach the howling, chaotic, hair-raising, frenzied bellow of 7,000rpm or more.

This car, this engine, this noise, is the very essence of why supercars must always exist. It’s equal parts art, science, engineering and emotion, and it’s all things that make you look at a car and feel pride in the whole of mankind that we can make something this extraordinary.

Yet, the reality of driving the SLS with intent is that it’s coloured by that underlying feeling of unfettered aggression.

It’s all in the minutia of its control weights. The unexpectedly nervous initial bite to the steering, the sharp response from the short and not quite feelsome enough brake response, and also in the way you feel like you need a rudder rather than a wheel, so distant is the car’s front end from your seat. It all adds up to a car that is manageable and encouraging to a point, yet that also makes it clear that you treat it with respect. Or else.

It’s like when you see a program about an amazing, generous person who’s dedicated their lives to rescuing grizzly bears, and has a seven-foot, ‘domestic’ grizzly that lives with them in their idyllic Alaskan lodge. You see it, affectionately pawing said animal-loving person with its massive paw, and you think 'that’s truly amazing. Beautiful. One of nature’s miracles. I wonder how long it’ll be before that person gets eaten?'

That’s what it feels like, driving the Mercedes SLS AMG Black Series. How wonderful it is. How incredibly intoxicating the noise. How devastatingly beautiful. How long before it kills me?

And d’you know what? If I had the money, I’d be the first to take the risk. 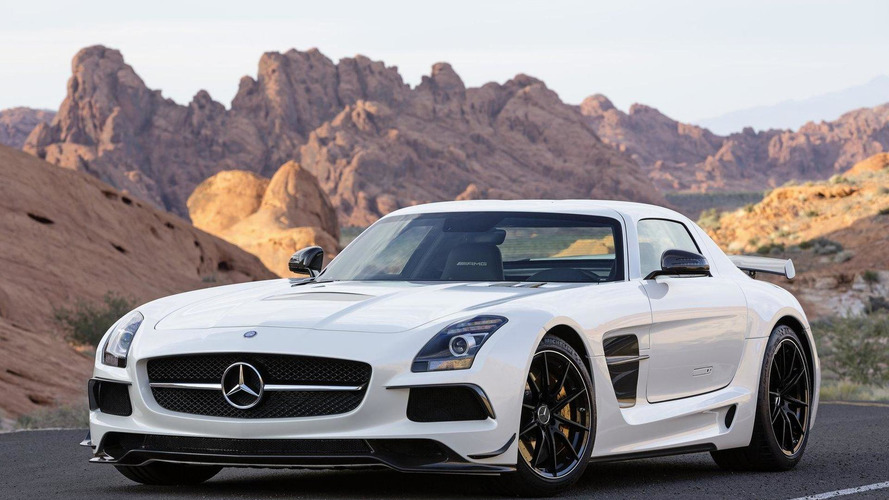